Islamic leadership in London is proposing, and trying to enforce, the practice of Sharia Law. END_OF_DOCUMENT_TOKEN_TO_BE_REPLACED

There is no denying that America is facing a tipping point. And, at some point, enough will have been enough. But, on which front? Troops are still engaged in operations in both Iraq and Afghanistan. Now they face a possible operation in Libya as the turmoil continues.

Look, everyone knows that Qaddafi is a mad-man. He has killed his own people, and will continue as long as he is around. So, what does the future hold? Well, as fate would have it, we have a model that isn’t that old. And, if things continue the way some say, we are following it almost to a tee.

In 1991 we ‘stopped’ Saddam, but he stayed in power. What happened next? Well . . . We’re still there. We finally went in and got him, and now he’s a goner. But, with all the money that was spent to get him and liberate the Iraqis, and all the money that we are having to spend to re-build the country, we are amounting a huge amount of debt. And that’s exactly what they want. Hit us where it hurts, and that is in the pocket.

Well, the Iraq war was sold as a short strategic mission. Same as what we are told about Libya. Oops! Sorry, a ‘kinetic military action.’ What’s the difference? Nothing! One is simple to define, while the other is just an Orwellian attempt to appear neutral.

And, that neutrality is what will lead to the tipping point of sending in ground troops. Which questions, Why Libya? (Couldn’t he have just told the United Nations to take a hike?) The answer is simple. It is a strategy by the Obama machine to gain some level of popularity in an unfavorable upcoming 2012 election. His action, or lack of in most cases, is almost a mirror image of Bush. All that he opposed for Iraq, is leading him to accept the fact that his foreign policy approach to apologize is one if ignorance.

With so much Middle Eastern turmoil, and lack of direction from Obama, and his administration, in his laid back ideology has brought America to its knees. Once seen as a dominant global superpower, America is now seen as the whipped sister that the left has wished her to be for years.

So, as it seems, America has finally reached a tipping point as Obama; the Emperor without clothes has humpty-dumptied his way off the great wall, and is dithering his way off the golf course and into campaign mode, and for what? A kinetic military action, aka war, without any real direction to save himself for a 2012 run?

Video of President Obama and his remarks on Libya. 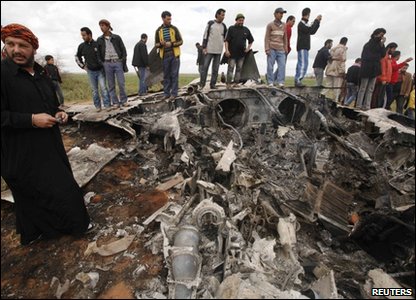 John Boehner has expressed the concern of most Americans to President Obama over involvement in Libya. And that is, “Define the mission.”

“The president is the commander-in-chief, but the administration has a responsibility to define for the American people, the Congress, and our troops what the mission in Libya is, better explain what America’s role is in achieving that mission, and make clear how it will be accomplished,” the Ohio Republican said in a statement. “Before any further military commitments are made, the administration must do a better job of communicating to the American people and to Congress about our mission in Libya and how it will be achieved.”

With the approval from the United Nations, the coalition forces have begun their attack against Muammar al-Qaddafi and his forces. The United States is leading attacks as more than 100 Tomahawk missles were launched toward the shores of Libya, hitting more than 20 intended targets including surface-to-air missiles, early warning sites, and key communication modes.

“We cannot stand idly by when a tyrant tells his people there will be no mercy,” Obama said in a statement from Brazil.

The president also reiterated that the U.S. will not be deploying ground forces into Libya.

“What we are doing in necessary, it is legal, and it is right,” said British Prime Minister David Cameron. “I believe we should not stand aside while this dictator murders his own people.”

“It is now necessary to open the stores and arm all the masses with all types of weapons to defend the independence, unity and honor of Libya,” Qaddafi said in a speech broadcast on Libya state television, according to Reuters. He also warns that weapons depots are being opened to arm the Libyan people in defense.

In Russia, there is no question who is leading things and that person is Prime Minister Vladimir Putin. Having served as President from 2000 through 2008, he certainly knows a thing or two about how Russia operates. And, as elections are fast approaching for 2012, there is a buzz about him throwing his name in the hat. But, there is more to it for Russia than electing Putin.

As he looks to be the more popular choice, it certainly seems an easy win. But, if he were to become elected, things could change. One of those things could be what ex-Soviet President Mikhail Gorbachev has been talking about for nearly a year, a sliding back into Soviet authoritarian ways. Which could severely reverse the growth that Russia has taken advantage of over recent years. In other words, the electing of Putin in 2012 could lead to stagnation both economically and politically.

Political stagnation would be very harmful, as political parties have been calling for change. A change to policy that has been sought after for some time. And, with the possible electing of Putin, it could most definitely bring a Cold-War era type of change that would not be liked by the United States and its European allies.

But, that should come as no surprise with the recent START treaty as it heavily favors Russia and their nuclear weapons systems. Even so much on their side, that Russia announced that they would be seeking a more ‘modern’ military by increasing defense spending. Priced at $650B and a GDP impact that would triple it from 0.5% to 1.5%. This is cause enough to see the direction that Russia is headed.

So, you see, it is more than just the politics that are in play with the future election of Vladimir Putin, it is the global impact that it would play.

The uprising in Libya is leading to the possibility of the collapse of Qaddafi and his long time reign of power. Like Egypt, the people are pushing for more freedom and human rights. But, there is one thing that differs. Egypt had something that could step in immediately and take over, where Libya has Qaddafi and that’s it.

There is no safety catch in Libya. The military is on the side of Qaddafi, and they demonstrate their allegiance when they follow through with orders to fire upon the people. The actions in Egypt were peaceful in relation to the continuing bloodshed in the streets of Tripoli.

The collapsing of Qaddafi, comes as the squeeze is felt from all sides. There are new sanctions that were handed down from the United Nations. The assets of Qaddafi were frozen, and banks weren’t taking his money so as to keep it safe. There are only a handful of people on his side.

It is certain that he will be removed from power. But, questions remain as to who will step into power when he is removed.

There are protests being held in the streets of Bahrain, leaving some with the unanswered question if Bahrain will be the next to fall. It only took 18 days to topple the 30 year long regime of Hosni Mubarak in Egypt, while the demonstrations pushed for more freedom and democracy.

As it seems, the dominoes are lined up and waiting to fall. Some, however, have already have either fallen or are in the process. Much like the scheduled protests in Yemen and Iran, the people are starting to realize that the regimes are in it for themselves only. Collecting all they can, and oppressing the people is what they are all about.

So, what are they demanding in the streets of Bahrain?