Speaker Boehner’s plan that was earlier approved by the House was short-lived as Senate Democrats voted to kill it. And, one would think that after all the ideas and planning that had been laid out on the table something could be agreed upon. But in typical Washington cat and mouse games, it all will be decide on at the last minute. And Americans will be left wondering if they would have been better off if nothing was done at all. END_OF_DOCUMENT_TOKEN_TO_BE_REPLACED

In the coming week, Congress will vote on the repeal of Obamacare. But why? Obama has already stated that he would veto it, and with a democrat majority still in the Senate that would likely block it from going further, why would Congress still push through with efforts to repeal it? Simple.

END_OF_DOCUMENT_TOKEN_TO_BE_REPLACED

In case you missed the historic reading of the Constitution by the 112th Congress, below are the SIX parts of the reading.

END_OF_DOCUMENT_TOKEN_TO_BE_REPLACED

Over at Townhall.com, Michael Barone pointed to the idea that the GOP doesn’t know what to do next. And, the answer is: They really don’t know.

In times past, the nation came to a head as to what direction it needed to go and again it seems to be at a crossroad. However, the GOP isn’t clear on what direction to take. With major issues on the table –  the ever increasing debt, looming unemployment numbers, a stagnant economy, and a war that the public doesn’t support – not one person has come out in the name of the GOP and laid down his/her plan.

There is a quote in that all proplems are a management problem, and this quote is rather fitting for the GOP. There is NO clear leader in the party, and those that are supposed to be don’t seem all that interested.

Time is not on the side of the GOP. Faced with the probability of taking over in Washington, they still are not taking cues from the public. The public is clear in that they want to know a plan. The GOP fails to understand that the public will be the one to put them in office, or take them out.

Regardless who the frontrunners are for 2012 Presidential nomination, a clear stance needs to be public. The GOP has failed in uniting the voters. One way for them to do that would be to take those frontrunners and have them lay out their plans and formulate them into one. They could still differ as to their oppinions on how they would handle the issues, but at least they would finally show unity and direction. Most of all, the GOP would show a sense of leadership.

Instead of “draining the swamp” of corruption as House Speaker Nancy Pelosi promised Americans in 2006, under her tenure the congressional swamp has grown more putrid, more corrupt, and more out-of-touch with ordinary Americans.

With abundant just cause, Americans can’t stand the smell of the squawking, lethargic, spendthrift Congress run by Pelosi—a whopping 11% approval rating according to Gallup. Americans have no faith, confidence or trust in the Pelosi-controlled Congress. There is good reason for this dismal approval rating.

Enter Congressrat Charlie Rangel who represents Harlem. Although he is presumed innocent until proven guilty, anyone can see that Rangel is an unethical schmuck who is more deserving of a prison cell than a seat in Congress. The shadow of corruption has followed Rangel around for years.

Rangel has been charged with 13 ethics violations. You may recall Rangel stepped down from his chairmanship of the House Ways and Means Committee— the committee that writes our tax laws—for not paying all of his taxes. One has to wonder if he shared tax-cheat tips with Treasury Secretary Tim Geithner.

One of the 13 charges against Rangel is that he failed to disclose hundreds of thousands of dollars in income and assets over the years. Rangel will surely try to wrangle himself out of his swamp-infested tax mess but the evidence against him stinks like standing-still swamp water. Rangel is the current poster child for congressional corruption.

President Obama, Pelosi and other Democrats know Rangel is a political liability that they don’t need at the moment, as they are doing enough damage on their own to the Democratic Party with their Socialistic policies. Rangel’s ethics trial is set to start in September which is just two months before the Democrat swamp-draining election in November.

Rangel is not alone when it comes to being investigated and charged with unethical behavior. Democratic Congressrat Maxine Waters also faces ethics charges related to helping banks receive federal bailout money, including a bank that her husband had a financial stake in. Surely this is all just a big misunderstanding.

Just watch, the Congressrats on both sides of the political isle will circle the wagons and protect Rangel. Regardless of the outcome of his trial, they will speak of all the good work he did in Congress, how he worked tirelessly to serve his constituents, was a patriot and loved America, etc. Not one of them will say that Congress is a better institution with Rangel out of it. 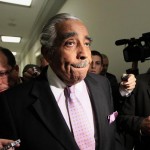 Things are not shaping up well for Congressman Charlie Rangel, as he is faced with 13 ethics violations. And, as he is reported to have had opportunities to reach some level of a deal, Rangel has taken the choice to face his peers.

Leading the four-member investigative panel sat Rep. Gene Green (D. TX) said, “One of the most difficult tasks assigned to a member of Congress is to sit in judgment of a colleague.”

Of the ethics violations, four issues are taking center stage: Rangel’s solicitation of donations for a public service center at the City College of New York, his failure to report income and assets, his use of a rent-stabilized apartment for campaign offices, and taxes he did not pay on rental income from a Dominican Republic beach villa.

Recently Gallup put up poll results in which they asked people how much confidence they had in institutions in America. The results tell us that not much has changed since the last time the poll was conducted, unless you are the president.

While Congress still ranks last, the mumbers do not favor the president at all. Even when looking at his overall approval ratings which are down 17 points from this time last year. Things just don’t look good for the president.

With a defecit nearing $1.5 trillion, and earmarks at the cost of $16.5 billion, the Congressional Pig Book shows a decrease in earmarks both in numbers and dollars. The Pig Book is put out by CAGW, Citizens Against Government Waste, and is their annual summary of the pork-barrel projects in the federal budget.

Search the 9,129 pork-barrel projects in the 2010 Congressional Pig Book HERE.

The direction of the 2010 elections look to shape a new change. A change lead by the people, which the Founding Fathers were prepared for. They laid out the direction in the Declaration of Independance.

That whenever any Form of Government becomes destructive of these ends, it is the Right of the People to alter or to abolish it, and to institute new Government, laying its foundation on such principles and organizing its powers in such form, as to them shall seem most likely to effect their Safety and Happiness.

That is exactly what is going on today. There is an uprising of people, namely those associated with the Tea Party movement. They have become so against the current direction of the current administration that now they are putting a lot of pressure on those elected officials facing re-election in 2010.

So much pressure in fact that some of them have bowed out before their term is up. The most current being Evan Bayh, and others like Chris Dodd. Even the Kennedy clan is taking heat, with the only remaining Kennedy stepping down.

So, what does all of this mean? A simple look at the current polls show that Republicans are ahead. In the most recent Rasmussen telephone poll, 45% of the people would vote Republican while only 36% would vote the Democrat. The people are fed up. That’s why the Tea Party movement is so popular. People are ready. They are becoming more educated on what their elected officials are trying to do, and the Democratic party is getting worried.

That is the reason they are stepping down. They don’t want to lose. Nobody wants to lose. However, the people are starting to realize that if the Democrats continue to stay in power, the only one that will lose is the people themselves.

In what appears as a neverending bill, packed away deep within the health care reform bill will prevent future Congresses will not be able to reform a single word. This was brought to light by South Carolina Senator Jim DeMint.

This little provision that is being brought forward by DeMint is bringing quite a buzz. Especially with regards to the constitutionality of the bill. Not only with it written so changes are not allowed, it is also being debated over how they can mandate that everyone must be covered or you will be fined.

(2) SPECIAL RULES.—Notwithstanding any other provision of law—

‘‘(A) WAIVER OF CRIMINAL PENALTIES.— In the case of any failure by a taxpayer to timely pay any penalty imposed by this section, such taxpayer shall not be subject to any criminal prosecution or penalty with respect to such failure.

‘‘(B) LIMITATIONS ON LIENS AND LEVIES.—The Secretary shall not—

‘‘(i) file notice of lien with respect to any property of a taxpayer by reason of any failure to pay the penalty imposed by this section, or

‘‘(ii) levy on any such property with respect to such failure.

There’s no penalty at all for failing to get insurance or failure to pay the penalty. It’s not a mandate.

Prosecution is authorized under the Code for a variety of offenses.  Depending on the level of the noncompliance, the following penalties could apply to an individual:

• Section 7203 – misdemeanor willful failure to pay is punishable by a fine of up to $25,000 and/or imprisonment of up to one year.

Now, this is something that will become an issue once the two health care reform bills are merged. So, currently Jim DeMint and John Ensign have raised a Constitutional Point of Order on the Senate floor that will be voted on tomorrow. Here are their statements:

“Forcing every American to purchase a product is absolutely inconsistent with our Constitution and the freedoms our Founding Fathers hoped to protect,” said Senator DeMint. “This is not at all like car insurance, you can choose not to drive but Americans will have no choice whether to buy government-approved insurance. This is nothing more than a bailout and takeover of insurance companies. We’re forcing Americans to buy insurance under penalty of law and then Washington bureaucrats will then dictate what these companies can sell to Americans. This is not liberty, it is tyranny of good intentions by elites in Washington who think they can plan our lives better than we can.”

“I am incredibly concerned that the Democrats’ proposed individual mandate provision takes away too much freedom and choice from Americans across the country,” said Senator Ensign. “As an American, I felt the obligation to stand up for the individual freedom of every citizen to make their own decision on this issue. I don’t believe Congress has the legal authority to force this mandate on its citizens.”

Also take a look at what Heritage has on this very issue.