It’s a question I think many people think about at least a few times in their lives. For me, it seems like it’s always something I think about. I constantly want to know how I can be better, or do more, or whatever.

Here is a little of the backstory…

A few weeks ago, a close friend of mine suggested I take one of those silly tests about your personality. I think the one he referred me to was at 16Personalities.com (If you’ve never taken a test like this, it can be rather eye-opening for you and those around you. Best yet, this one is FREE!)

I took it and was not really surprised at what my result was. I was and am one of the more rare types. I’m an INFJ.

What did surprise me about taking this was what it said about me. As I was reading more about what an INFJ person is, I was sharing it with my friend. All he kept doing was nodding his head in agreement. Either he knows me really well or someone has been following me around for a lot of years compiling data and put it together in a very condensed form and tipped off my friend to check it out. I kept thinking to myself how accurate this thing was.

Intrigued, and true to being an INFJ, I wanted to know more. So, what did I do? Validate the results. I found another personality test, took it and came back with the same results.

Still somewhat skeptical, I had this friend of mine take the test and answer the questions as he perceived me to be. Results? Hide the kids in the room because HOLY SH!T it was the same thing.

Having enough proof or validation, I decided to dig a little deeper into more about being an INFJ.

INFJ people tend to spend a lot of time in their own heads thinking and pondering about things. This was one of those times!

All through my life, I’ve had people tell me I was intimidating or unapproachable. Or I just don’t look happy. Or I’m this or that. So, I decided that maybe I would try and be more open about this and what makes me tick. All in the hopes that the people around me understand me a little better so that my own little world becomes a much more pleasant place to be.

Here’s a video that might give you some insight: 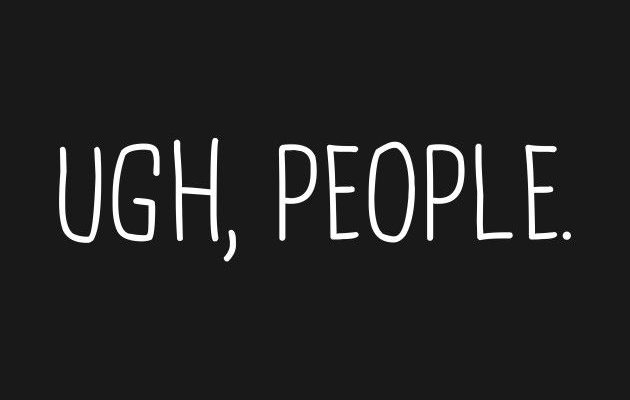 The title and lead image say just about all that needs to be said. I’m an introvert and you’re just gonna have to deal with it. Oh, and yes… Ugh, People!

Sounds a tad bit harsh. I know. And, I get it. Trust me, I’ve thought about it enough already.

That’s something introverts just tend to do. They think. A lot! While extroverts spend their time outside of their own minds, introverts tend to spend the majority of their time in their own heads. Thinking about anything and everything. It doesn’t mean they’re shy at all. Just that they would rather be alone with their thoughts.

For some of who are introverts, this can be somewhat conflicting. Myself, I deal with anxiety and depression which can be very frustrating. Caught up in my own thoughts can be like an elevator ride on a downward spiral. The internal struggle with trying to clear out dark thoughts only gets clouded over with more dark thoughts, and at times, even darker thoughts. And, it’s times like this where the best thing you can do for someone like me, is to just let me be. Let me recharge!

We all have our own ways to recharge. As for me and myself? Well, we like to stay home and set all the locks on the doors. Again, harsh. But, I need you to understand that – how can I say this without sounding too harsh again? – it’s just not mentally healthy for me to be in a socially charged atmosphere to recharge.

As a matter of fact, it’s even more draining than you realize to be in groups, small or large. It’s much more recharging mentally for me to be alone, or even one-on-one – as long as it’s with someone who’ve I’ve already accepted into my “inner social circle”.

The good thing is, I’m not alone in being an introvert. Despite making up 25-40% of the population, there are some pretty incredible people who are introverts:

I could certainly add many more names to that list! Maybe even yours? One thing remains: there’s nothing wrong with being an introvert as long as you know how to really connect with us.

Here’s a look into what it’s like behind locked doors in our house: