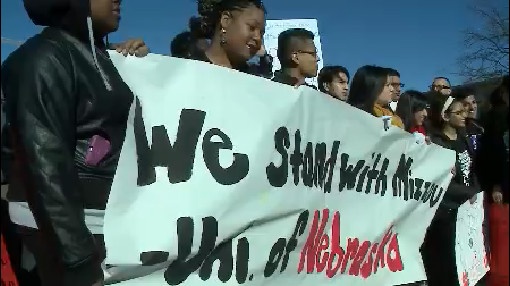 It’s not enough for the ‘Black Lives Matter’ protesters to demand the president and chancellor of a university resign because of their ‘white privilege.’ Now, they’ve taken things to another level of nutty!

The following list of demands come from the protest groups various colleges as posted on their activist website demands.org:

We demand that University of Missouri System President, Tim Wolfe, writes a hand-written apology to Concerned Student 1-9-5-0 demonstrators and holds a press conference in the Mizzou Student Center reading the letter. In the letter and at the press conference, Tim Wolfe must acknowledge his white privilege, recognize that systems of oppression exits, and provide a verbal commitment to fulfilling Concerned Student 1-9-5-0 demands.

2. At Amherst, protesters demanded President Carolyn Martin issue a written apology for a litany of sins:

3. Also at Amherst, protesters demanded President Martin denounce some signs put up by “free speech” advocates and also threaten the students who did it with disciplinary action and mandatory “training for racial and cultural competency.”

President Martin must issue a statement to the Amherst College community at large that states we do not tolerate the actions of student(s) who posted the “All Lives Matter” posters, and the “Free Speech” posters that stated that “in memoriam of the true victim of the Missouri Protests: Free Speech.” Also let the student body know that it was racially insensitive to the students of color on our college campus and beyond who are victim to racial harassment and death threats; alert them that Student Affairs may require them to go through the Disciplinary Process if a formal complaint is filed, and that they will be required to attend extensive training for racial and cultural competency.

We demand that school administrators, professors, staff, and student leaders acknowledge their racism, be it overt covert or passive.

We demand several black financial advisors whose sole purpose is to find and distribute scholarships and financial aid to and for black students specifically.

6. At Emory, students demanded raises and promotions for black faculty:

Black staff and administrators should receive an increase in their financial compensation or salaries. Changes should be made to the hierarchical structure of Campus Life which puts primarily white males at the top of the structure. More Black staff and staff of color should be in higher positions of power so that they can implement the changes that black students wish to see in the university.

We demand that The Johns Hopkins University creates and enforces mandatory cultural competency in the form of a semester long class requirement for undergraduate students as well as training for faculty and administration.

8. Princeton protesters also demanded mandatory cultural competency training and a new, better understanding of free speech to go with it:

WE DEMAND cultural competency training for all staff and faculty. It was voted down on the grounds of trespassing freedom of speech last spring semester. We demand a public conversation, which will be student led and administration supported, on the true role of freedom of speech and freedom of intellectual thought in a way that does not reinforce anti-Blackness and xenophobia.

We demand that Purdue create and enforce a required comprehensive racial awareness curriculum for all students, staff, faculty, administration, and police. This curriculum must be vetted and overseen by a board of diverse students, faculty, and staff.

We demand that the University of Cincinnati enforces a fully funded comprehensive racial awareness curriculum that is mandatory for all students, faculty, staff, and police structured by a caucus comprised of students, community members, and administrators of diverse backgrounds to be put in place by the start of the 2017-¬2018 academic year.

We advocate adding a multicultural event requirement once a quarter to all C&I classes. This requirement would mandate students to attend an event that amplifies the voices of marginalized students on campus. Examples include: Difficult Dialogues, MCC Culture Shows, Markkula Center for Applied Ethics sponsored events, etc.

Expose students to systemic oppression through FWS and FHS-this includes but is not limited to issues on race, sexuality, gender, class and ability. The need for such programs to educate the student body is evidenced by numerous microaggressions felt by students of color. The cultural insensitivity on campus is further highlighted by race themed party proposals, such as an Indian Wedding Party and Colonial Bros, Pilgrims, and Navajos themed TNC

We demand the construction of a free-standing Multicultural Center with its own budget from the University to support social and academic programming by Spring 2017.

We demand a practicing professional civil rights lawyer to represent students of color. This lawyer will be paid by the college to inform students of their rights with no financial burden to students or student activity fees.

18. Students at Brown demanded a day of remembrance for the school’s role in the slave trade:

Integrating the history of Brown’s role in the slave trade into orientation for both graduate and undergraduate students;
Designating an annual day of remembrance and a series of sponsored events;

Require the Diverse Focus Forum and other top-level diversity institutions to have at minimum one person of color on their board. White women should not be given positions to speak on behalf of what it is black students want from their university.

20. Not to be outdone, Berkeley protesters demanded a building be renamed for aconvicted terrorist fugitive on the FBI’s 10 Most Wanted list:

The creation and support of a UCLA Afro-house. Many Black students cannot afford to live in westwood with the high prices of rent. An Afro-house would provide a cheaper alternative housing solution for Black students, that would also serve as a safe space for Black Bruins to congregate and learn from each other.

23. Several of the demands included more mental health services, but only University of Ottawa protesters specified a “therapist of color”:

Therapist of Color to be hired at the human Right Centre.

24. I know what you’re thinking. Where are the show trials? At the University of South Carolina protesters demanded investigations into three administrators. There was no explanation given for this, but the Charlotte Observer spoke to a protester who said the three administrators had failed to foster diversity on campus:

25. And the University of Toronto protesters went all out and demanded a free education for “black and indigenous students”: