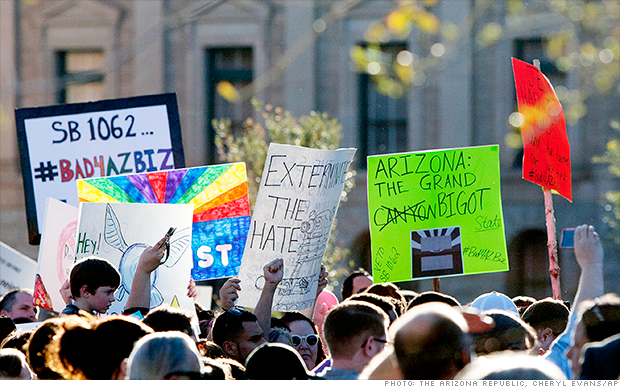 Arizona wants to protect business owners who want to deny a product or service because of their religious beliefs.

This should be a pretty open and shut deal as long as you look at it from a free market standpoint. Take a second and think about it. That would be the only reason a business would want to be able to protect themselves from anyone in the LGBT community who would be refused service.

In one sense, the table has shifted against the LGBT community. Instead of LGBT’s going on the offence, they are now on the defense. And, of course you’ll get those extremists on either side who are shouting YES or NO.

But take a second and take a second to look at this in the eyes of the free market system. Because, that’s how things work in the real world.

When the free market is allowed to work, there are real winners and losers. If someone wants to purchase a good or service from you and you deny them because of your religious beliefs, the real winner is the person who was denied.

You are offering either a good or a service, you aren’t selling your personal beliefs. The only one’s that are out doing that are churches. But, then again they aren’t selling anything.

The free market allows for you to be a winner as long as you continue to sell your good or service. If not, you’ll close up and go broke! If you make the best cake in the town, but you won’t sell that cake then it’s time to consider yourself done.

Denying your good or service to the LGBT community is no different than telling a non-white to use a certain water fountain. This is a giant step backwards.