You are here: Home / Politics / Protests in Chicago Shut Down Trump Rally

Donald Trump was scheduled to hold a rally in Chicago but protesters had other ideas. 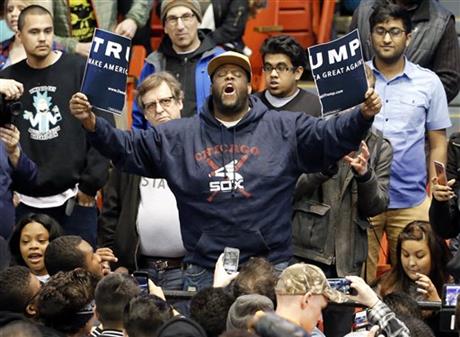 MoveOn.org and Black Lives Matter groups banded together to give opposition to the pro-Trump crowd.

Sadly, the very crowd doing the protesting is complaining about the lack of jobs and how they don’t have any hope for their future. Yet… they continue to support democrat candidates like Hillary Clinton and Bernie Sanders.

Clinton and Sanders support the ideology that keeps these groups tied down without jobs and dependent on the government for everything.

Donald isn’t quite off the hook. At least that’s how some others in the media, and even candidates, are trying to spin the situation.

There is one thing to remember during this entire situation unfolding in Chicago.

The groups that have organized themselves in order to silence Donald Trump, are the very same groups saying they’ve been silenced and want to be heard.

When you shut out someone else’s right to assemble, it negates the ‘progress’ they’ve worked so hard to achieve.

For an in-depth look at things, view this Breitbart post.