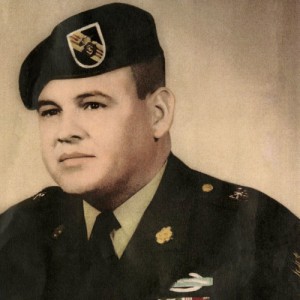 Rodela is being recognized for his valorous actions on Sept. 1, 1969, while serving as the company commander in Phuoc Long Province, Vietnam. Rodela commanded his company throughout 18 hours of continuous contact when his battalion was attacked and taking heavy casualties. Throughout the battle, in spite of his wounds, Rodela repeatedly exposed himself to enemy fire to attend to the fallen and eliminate an enemy rocket position.

Rodela retired from the Army in 1975. He currently resides in San Antonio, Texas.

On Sept. 1, 1969, the 3rd Battalion had the mission of moving in support of the 1st Battalion, 3rd Mobile Strike Force, which had suffered heavy casualties as a result of enemy contacts in Phuoc Long Province. The terrain in the area consisted of steep hills covered by dense underbrush and a double to triple canopy jungle. The sky was overcast. The temperature and humidity were both in the 90s.

While enroute to and approximately 800 meters from the intended objective; the 3rd Battalion came under extremely heavy 81mm mortar, rocket, light and heavy machine-gun, and small arms fire, from an unknown sized enemy unit. The initial volume of fire placed on the 3rd Battalion was so vicious that the battalion suffered 42 casualties almost immediately. Because of the intensity of the enemy fire and the numerous casualties, a critical state of confusion was present and the battalion was on the brink of panic.

Rodela’s company was located to the battalion’s east flank, and it was his enemy that received the largest concentration of the enemy’s fire during the initial attack. He realized that if his troops did not overcome the initial shock and reorganize, the entire battalion might be overrun in an enemy assault. Rodela disregarded the withering enemy fire, immediately began to move from man to man in his company, physically pushing them into defensive positions to form a half moon perimeter.

His clear thinking and quick action prevented much heavier casualties in his company and relieved the pressure of the remainder of the battalion, providing time to organize a defensive perimeter. The immense concentration of enemy fire which was brought to bear on Rodela’s position is practically impossible to describe with any justice.

His entire company was hidden by dust, smoke, and exploding enemy mortar and rocket rounds. The dead and wounded were laying the entire length of his defensive line. That his unit did not break and run to the rear is a great tribute to Rodela’s leadership. It was later determined that his company suffered 33 wounded and 11 killed in action. This includes one platoon leader and five squad leader in the initial few minutes. As the fire slackened, Rodela suddenly jumped up. He was the only member of his company who was moving and he began to run from one position to the next checking for casualties.

A few minutes later, he was moving the survivors into different positions in an attempt to form a stable defensive line. While this was staking placing, the dust from the bullets landing all around him was clearly visible, but unbelievably he was not touched.

Rodela is set to receive the Medal of Honor posthumously in a ceremony at the White House on March 18.