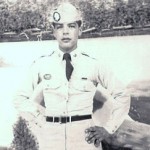 He joined the U.S. Army as a light weapons infantryman (parachutist) during the Korean War.

Baldonado distinguished himself on Nov. 25, 1950, while serving as a machine-gunner in the vicinity of Kangdong, Korea. Baldonado’’s platoon was occupying Hill 171 when the enemy attacked, attempting to take their position. Baldonado held an exposed position, cutting down wave after wave of enemy troops even as they targeted attacks on his position. During the final assault by the enemy, a grenade landed near Baldanado’s gun, killing him instantly. His remains still have not been found.

Baldonado’s acts of bravery were briefly described in a book, “Disaster in Korea: The Chinese Confront MacArthur.”

The Distinguished Service Cross is presented to Cpl. Joe R. Baldonado, U.S. Army, for extraordinary heroism in action while serving as a machine-gunner with Company B, 187th Airborne Infantry Regiment, Nov. 25, 1950, at Hill 171 in the vicinity of Kangdong, Korea.

At 4 a.m., Nov. 25, 1950, the Second Platoon of Company B was occupying positions on Hill 171, near Kangdong, when the enemy launched a strong attack in an effort to seize the hill. By 6 a.m., the platoon had expended most of its ammunition in repelling the enemy attack, and the platoon leader decided to commit his third squad, with its supply of ammunition, in the defensive action. Since there was not time to dig in because of the proximity of the enemy, who had advanced to within twenty-five yards of the platoon positions, Baldonado, a machine-gunner of the third squad, placed his weapon in an exposed position and delivered a withering stream of fire on the advancing enemy, causing them to fall back in disorder. The enemy then concentrated all their fire on Baldonado’s gun, and attempted to knock it out by rushing the position in small groups and hurling grenades. Several times grenades exploded extremely close to Baldonado, but failed to interrupt his continuous firing. The hostile troops made repeated attempts to storm his position and were driven back each time with appalling casualties. The enemy finally withdrew at 7 a.m., after making a final assault on Baldonado’s position, during which a grenade landed near his gun, killing him instantly.

Baldonado is set to receive the Medal of Honor posthumously in a ceremony at the White House on March 18.