You are here: Home / Politics / Obama Looks to Increase Jobs Rhetoric Leading Up to Election

President Obama has continued to press the issue that his administration needs to help create jobs. But, that is nothing more than empty rhetoric. 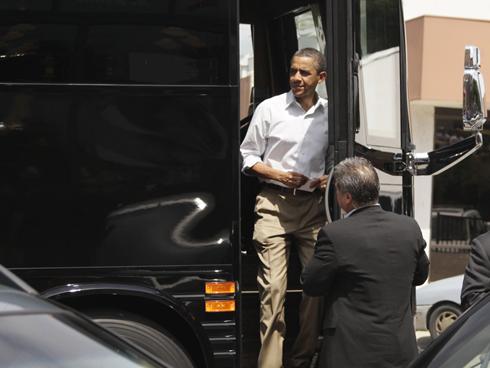 Complacency is a cancer. And that is exactly what is happenings due to the policies of this administration. Continuing to offer, and extend unemployment benefits creates a horrid level of complacency. Not to mention the extra burden of welfare, and the cost it plays on the increasing defecit.

But, the president says we need to increase taxes! However, if you were to ask the majority of Americans, they would say that the government has a spending problem, not a problem with income. The average household gets it. They see that the amount of increased spending in the forms of unemployment and welfare benefits are killing the economy.

So, how can the government help in job growth? Getting the heck out of the way and offering real tax reform and entitlement reform. While there are a few people that think increasing taxes on the super-rich is the answer, a more ideal approach would be to lessen the burden of taxes. How can that be? The less going out in the form of taxes on the average household, the more potential it has of making its way into the economy.

You see, when there is more money to go out, the increased opportunity of creating jobs that would otherwise not be able to be afforded. Lessening the tax burden on the people gives them the ability to spend more. Thus, spurring the much needed boost for the economy. There is no certainty in the market today, let alone stability.

With all the burdensome government programs put in place, it has placed such a squeeze on Wall Street as well. You used to be able to look to Wall St for an outlook into the markets, but they are just as unsure because of what Washington will do next. It seems that it is a game of wait and see.

How is that offering security? It doesn’t. The majority of people have been stretched so thin, they are forced to choose which bills to pay this month and which to pay next month. But, then again, the government seems to want to do the same.

Just take a look at the recent increase in the debt ceiling, or to put it in street terms: credit extension. The raising of the debt ceiling was sold to Americans and Washington as a do or die situation. If we didn’t allow it, our AAA credit rating would be in jeopardy. What happened? We lost it anyway! Why? It was said that the government didn’t show any signs of significantly decreasing its debt.

Which is why Obama is on a jobs push. It’s the only thing that he can hope on to save his campaign. His hope is that he can sell people on the idea that with a Republican majority in Congress, they are the ones keeping it stagnant. He would be offering solutions, but they would get voted down and shut out by Congress.

So where is he at now? He is on a [campaign] bus tour selling this exact idea. He said that if Congress fails to pass his ‘plan to boost the economy, to create jobs and to control the deficit, the choice [in 2012] will be very clear.’

He also criticized the House who ‘doesn’t seem willing to make the tough choices to move America forward.’

But if you ask most Americans, the toughest choice Obama has made recently is whether to use his 5-iron or 7-iron.