Ronald Reagan – “Well, we conservatives have been in Washington now for a while and we occasionally need to remind ourselves what brought us here in the first place: our unshakable, root-deep, all-encompassing skepticism about the capital city’s answer to the UFO, that bizarre, ever-tottering but ever-flickering saucer in the sky called “The Prevailing Washington Wisdom.”

And, right now, some of the Potomac seers are saying we conservatives are tired; or they’re saying we don’t have a candidate, some of those candidates in the other party saying how easy it’s going to be to win the presidency for their liberal agenda because they can run on, of all things, this administration’s economic record. Boy, have I got news for them. They’re seeing flying saucers again. I’ve even got a quote for them. It’s from Napoleon — the morning of Waterloo — at breakfast with his generals. This is true. He said, “I tell you what — Wellington is a bad general. The English are bad troops. We’ll settle the matter by lunchtime.”

Well, my fellow conservatives, I think that’s exactly what this year is about — settling the matter by lunchtime. Letting the liberals in Washington discover once again the lesson they refuse to learn. Letting them know just how big our election year will be because of booming economic growth and individual opportunity; and how big an election year ball and chain they’ve given themselves with a seven-year record of opposition to the real record. But, most of all, letting them know that the real friends of the conservative movement aren’t those entrenched in the capital city for 50 years; the real friends of the conservative movement are an entity that gets heard from in a big way every four years and who, I promise you, are going to be heard from this year. I’m talking about those who, if the case is aggressively put before them, will vote for limited government, family values, and a tough, strong foreign policy every single time. I’m talking about those believers in common sense and sound values, your friends and mine, the American people.

George Washington – “The preservation of the sacred fire of liberty, and the destiny of the republican model of government, are justly considered deeply, perhaps as finally, staked on the experiment entrusted to the hands of the American people.”

On this day in history – In 1854, the Republican Party of the United States is organized. 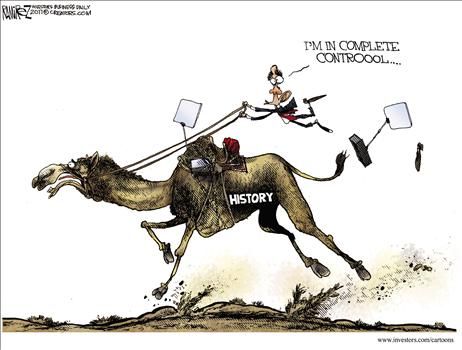