You are here: Home / Politics / Miscellaneous / What is Wrong Here? 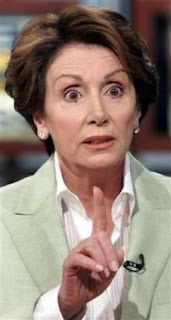 Today, House Speaker Nancy Pelosi is out trying to push another stimulus package. What does this mean? Is this the next “fix-all” step?
First, it is important to remember what happened earlier this year. The Economic Stimulus Act of 2008. This was enacted on February 13 and had a projected cost at over $150 billion. More importantly was their rationale for this act. They touted this Act as something that would stimulate businesses and consumers to spend. They were in the hopes that it would boost consumer spending and that targeted tax incentives would boost business spending.
This piece of legislation was presented to the American people as a way that would add confidence to the markets, and take a lot of the fear away.
Second, it is important not to forget what happened most recently. Most are saying that the Emergency Economic Stabilization Act of 2008 is the largest movement towards a socialist state that this country has ever seen. Enacted on October 3, and with an estimated cost hovering at the heights of $850 billion and beyond, it was pressed to stabilize the economy and to improve liquidity for investor confidence.
What type of confidence did it invest? NONE. The DOW has made record drops, leaving many to wonder and speculate to the point that many of those same people pulled their money out of the market.
So, what was next? The G7 met over the weekend, and together agreed that action was to be taken and to be acted on quickly. Their quick actions led the investment markets to make incredible gains. Today, the DOW gained 936.42 pts. to close at 9387.61. The biggest single gain in history.
Which brings us back to what Nancy Pelosi brought up today, and that being yet another “stimulus package.” Where does she think this money would come from? Our national debt is SO large, it now does not fit on the debt calculator in NYC. With the government already having spent more than $1 trillion ($1,000,000,000,000) this year, what would lead anyone to think that any more would fix it? That is pure INSANITY! Insanity is doing the same thing over and over again and expecting different results.
How many times will they try a stimulus package or any other type of emergency economic act? When will they realize that what they are doing is insane? According to House Speaker Nancy Pelosi, maybe just one more time.