With all the recent news about the bank bailout, it was only a matter of time before others tried to seek out a handout. Currently, the big 3 — General Motors, Ford Motor Company, and Chrysler — are out in full force asking for a “loan.”

While there are many ideas circling around about who is to blame for the troubling of the big 3, one idea points to the union. So, what are some of the things that the UAW has said, and what is being said now?

The history of the UAW is the story of ordinary working men and women accomplishing extraordinary things through the strength of their solidarity and the power of their collective action.

The UAW, however, is more than a collective bargaining agent — we are a social movement committed to dealing with the problems of all people.

So, what is their “collective bargaining,” and what have they bargained for?

The collective bargaining process gives workers power in decisions that affect their everyday lives on the job as well as the economic security of their families.

As impresive as it is, the UAW’s success record at the bargaining table is only part of the story. From our earliest days, the UAW has been a leader in the struggle to secure economic and social justice for all people. The UAW has been actively involved in every civil rights legislative battle since the 1950’s, including the campaigns to pass the Civil Rights Act of 1964, the Voting Rights Act of 1965, the Fair Housing Act, the Civil Rights Restoration Act of 1988 and legislation to prohibit descrimination against women, the elderly and people with disabilities.

While the UAW does have a remarkable record for the good, it could certainly be agrued for the bad. Especially looking at their support for the Fair Housing Act. They have long supported the idea that if you can’t afford the house you want, you should get it any way. Which has ultimately lead this country, and world, to an economic crisis. So, what else have they fought for?

The agreement will deliver more than $13,000 in economic gains for a typical UAW member, including a $3,000 signing bonus, two 3 percent lump sums and a 4 percent lump sum.

Active workers will see their comprehensive health care coverage continue, with dental, hearing and other benefits improved. Retired workers will have their health benefits secured by a Voluntary Employee Beneficiary Association (VEBA), prefunded by GM with $29.9 billion in cash and other assets. The fund can only be used to pay retiree health benefits, and will remain solvent for decades regardless of the financial condition of GM.

Knowing then that GM was looking at possible problems, the UAW found a way to secure funding whatever GM’s financial status. Considering the $25 billion they seek out now, one would look towards the UAW to conceed this funding to ensure their employment. 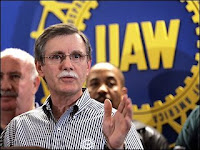 Recently, Ron Gettelfinger — the head of the UAW — decided to try the blame game.

The WSJ reported that:

The president of the United Auto Workers union said the dire financial troubles of the U.S. auto makers is the result of this year’s spike in gasoline prices and the meltdown on Wall Street, not missteps by management or high labor costs.

Although GM Chief Executive Rick Wagoner has come under heavy criticism, Mr. Gettelfinger said a change in management is not needed. “It is a stretch to say that management is responisible for all the things happening now that no one anticipated or expected,” he said.

That’s a shift from the past when union rhetoric typically pointed the finger at management mistakes as the main reason for Detroit’s troubles.

However, now it seems that the finger pointing is going the other way, and not toward where the problem is. Certainly the finger could point from the UAW to GM, but it would be pointing right back from GM to the UAW. The UAW has fought for many perks of the job, including wages and benefits both employed and retired. How is it that the UAW says that this is none of their doing, when they are a major part of the problem? Striking for a $29+ billion benefit package would certainly be something that the UAW could put on hold when they are out lobbying Congress for $25 billion, but Mr. Gettelfinger has different plans.

The union will not make concessions in order to seal a deal for governmental aid, Mr. Gettelfinger said, He cited significant concessions already made by the UAW in its 2007 contract with the auto makers. They include the establishment of a separate health-caree trust for retured auto workers and the introduction of a two-tiered system wages that allow the Big Three to hire new workers t significantly lower wages and without fixed pensions.

With Mr. Gettelfinger, with the backing of the auto union, admittedly not conceeding to helping the BIG 3, they could be the ultimate reason for Congress not “bailing” them out.

The Word on the Street

In a forum post at DealersEdge, one member who calls his/herself Whiner poses a post titled: Yes, Bail ’em out -OR- No, let ’em fail. Many members of the forum weigh in with their comments, and here is what some of them had to say:

possum – Notice how you can’t buy a TV or a stereo or much of anything made in the US anymore? If you COULD buy an American made 19″ TV it would cost $5,ooo. The auto industry will go the same way. The unions are the cause of this. GM, Ford and Chrysler cannot sell a car for $30k that costs them $35k in production, warranty, retirement and health benefits. The Unions have priced themselves out of a job.

pjpeery – some assistance should be rendered to the auto companies ..with guarantees that they change the way they do business. i agree with that .. but what i hve a problem with is giving the uaw 25 billion dollars so they cn continue with their gold plated benefits ..

moparpartsman – I think the government should make the loans but I believe they should appoint an auto industry czar or oversight board to keep the manufacturers in line. Unions suck the life out of the automkers and perhaps the government can address this if they oversee them while the loans are repaid. — If any of the American automakers file bankruptcy this will be the end of the road for the American car. THe public will lose all trust in domestics for fear that their warranty or service will be affected and the resale value will tank.

sallen1 – The problem with the “auto-czar” is that the govt will look to protecting the union first. They dare not tread on their biggest contributors.

texaslp – I don’t get how the union workers can be so shortsighted. Good money and benefits now will be pretty useless to you when you put your company out of business.

wwfsmd? – Does anyone here really think that GM is going to go out of business? Give me frickin’ break. After years of miss- management, not forcasting the consumers needs and making concessions to the unions the chickens have finally come home to roost. Has anyone priced a new Escalade lately? How can Joe Sixpack afford a 70k price tag? Who is the vehicle targeted for? Does GM build a better vehicle now than in the past? Yes, but it is still 10 lbs of sh*t in a 5 lb bag. — They need to go into bankruptcy and restructure just like any other company that falls on its b*tt. Then they can get rid of all the unions and Fat Cats at the top (Who by the way, are not car guys in any sence of the world, unlike Iaccoa). Then maybe they can get back o making a vehicle that hte customer can afford and turn a profit. Does this mean that some people are going to lose their jobs and some dealers going to close? Absolutel. But that’s life in the big city, stop whining and find another job. Nothing in the Bill of Rights guarantees you a job. GM may come out of this smaller and leaner, but that is what needs to happen. Then they will be in a position to compete with the Japanese, who by the way are not bailing out their auto makers. — As far as unions go, the golden age is over and has been for a long time. They need to go away yesterday and the members need to be paid a realistic wage and basic benefits.

Tazz121 – I understand that there was a time and place for the unions, but that time is gone. Ifeel they are holding us all back form competing in the world economy. When is the last time you saw anything that said made in the USA? My 10 year old told me the other day that she would like to go to China some day. I asked her why and she said bacause that is where everything is made.

Certainly, there is a growing them with the members posting to the forum, and that would be the UNION.

If the unions were forced out, this would allow a total restrucuring of the BIG 3, in all aspects of business. They would be better positioned to compete with other auto makers with price, but more importantly product. Without the over-inflated costs of the vehicles, the BIG 3 would be poised to far surpass the foreign auto market. That is what the auto industry needs, as well as this country.