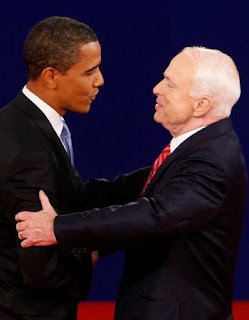 What in the bailout will help the people?
M – attacks Obama and his “cronies” for lending and getting contributions from Fannie and Freddie
O – says that credit markets are frozen, problem was deregulation, says he tried to re-regulate over the last two years, THIS IS THE BEGINNING OF THE PROCESS AND NOT THE END

Will it get worse?
O – says that we need to coordinate with other countries
M – the workers are the best and effective

How can we trust either when both parties got us here?
O – Washington is different from the way things are done in the home, talks about the increase of the debt, SPEND MORE MONEY ON THINGS, make spending cuts
M – has worked on reform against things like this, look at records and not the rhetoric, Obama proposes $800b in more spending, look at the records

What are highest priorities?
M – all can be worked on at the same time, build nuclear plants and create more jobs
O – energy first, health care second, education third

What sacrifices will you ask of Americans?
M – eliminate all that isn’t working, ELIMINATE EARMARKS, cut key spending, establish priorities
O – (talks about Bush right after 9-11) save energy, CALL TO SERVICE

Social Security, Medicare – date to reform?
O – take on entitlements, can’t work on it in two years but wants to work on it in first term, tries to explain his tax proposal
M – says it isn’t hard to fix it because it has been done before, TOO much special interests, Obama voted 94 times to increase taxes or against tax breaks, RECORDS OR RHETORIC

Should we fund a group on nuclear energy or invest in the garages of the people?
M – attacks Obama on voting, attacks

Health care coverage?
O – it is breaking household budgets, socialize it
M – offer a tax credit across state lines, give the choice to the people

How will economic stress effect foreign relations?
M – we are the greatest and will continue to be that way, attacks Obama
O – tries to answer attack but shifts to Bush and Iraq, talks about how much being spent in Iraq, agrees with McCain that we are the greatest

Use of combat services if not national security?
O – we have a moral obligation, can’t be everywhere at once, INCREASE INTERNATIONAL COMMUNITY
M – attacks Obama on withdrawl plan, we are the greatest force for good, must be able to beneficially effect situation

Pakistan or Al-Queda in Afghanistan?
O – move from Iraq to Afghanistan and change ways with Pakistan
M – says Obama wants to announce military attacks, speak softly and responsibly
O – if Pakistan won’t help then we’ll do it, agrees with McCain
M – would not telegraph his attack

How would you reorganize effort with Afghanistan?
O – Afghanistan wants our help
M – build up Afghan army, work with Pakistani government

Is Russia evil empire under Putin?
O – does not really answer but leans more toward yes answer
M – maybe but does not want to answer

Iran attacks Israel, send troop support for Israel without okay from UN?
M – yes, keep eye on Iran and nuclear weapons, attacks Obama on sitting down without pre-conditions, but would also need to use allies with Iran, cannot allow a second holocaust
O – cannot allow Iran nuclear weapons, Israel one of strongest allies, do everything to prevent it diplomatically, one-on-one talks with enemy

What don’t you know and how will you learn it?
O – the challenges of the presidency
M – what will happen here and abroad