You are here: Home / Military / Marine Court-Martialed and Discharged Fights Back on Refusal to Remove Bible Verse

Marine veteran Monifa J. Sterling was court-martialed for refusing to remove a bible verse she posted at her work station, which resulted in a bad-conduct discharge. She is now appealing the conviction.

This started because she had posted on the wall of her workspace a reference to Isaiah 54:17, paraphrasing it saying, “No weapon formed against me shall prosper.” Her supervisor requested she remove it, to which she did not. 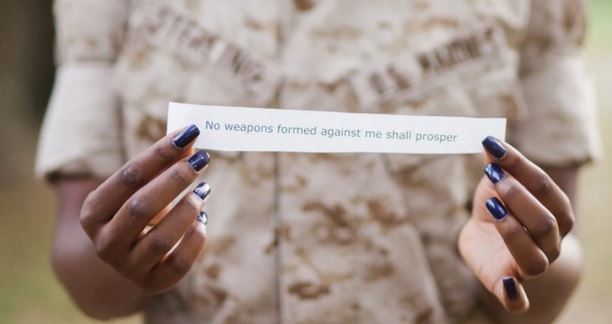 Her reason for not removing it was because “she believed it was her First Amendment right,” according to Michael Berry, a Liberty Institute attorney who’s representing her.

She later testified that she posted it for encouragement and inspiration.

In the military, an order is just that, an order. You are expected to follow through, and if you don’t then you face the consequences. In this case, Sterling was given an order and she elected to disobey.

Does that set the stage for her being court-martialed and ultimately being discharged from the Marines? While it is certain that there could be more to this story than is being reported, there also is a level of discretion that could have been exercised.

We are operating in a society today that permits certain cultures to have beards and head-dress due to religious customs, but punishes another for paraphrasing a scripture that motivates them in troubled times.

Sterling’s attorney, Berry says: “It’s the first case that I’m aware of [that will test] whether or not and how RFRA (Religious Freedom Restoration Act) applies to service members who have sincerely held religious views.”

Washington Post reports “a brief filed Tuesday by Sterling’s legal team requests that the case be reviewed by the U.S. Court of Appeals for the Armed Forces, which is considered one level below the U.S. Supreme Court.”