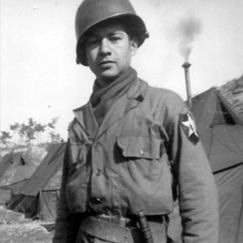 Then-Cpl. Victor H. Espinoza is being recognized for his actions on Aug. 1, 1952, at Chorwon, Korea. While spearheading an attack to secure “Old Baldy,” Espinoza’s unit was pinned down by withering fire from fortified positions. In daring succession, Espinoza single-handedly silenced a machine-gun and its crew, discovered and destroyed a covert enemy tunnel, and wiped out two bunkers. His actions inspired his unit and enabled them to secure the strong-point against great odds.

After leaving the Army, Espinoza resided in El Paso until his death on April 17, 1986. Espinoza is buried at Fort Bliss National Cemetery.

The President of the United States takes pleasure in presenting the Distinguished Service Cross to Cpl. Victor H. Espinoza, U.S. Army, for extraordinary heroism in connection with military operations against an armed enemy of the United Nations, while serving with Company A, 1st Battalion, 23rd Infantry Regiment, 2nd Infantry Division. Espinoza distinguished himself by extraordinary heroism in action against enemy aggressor forces at Chowan, Korea, Aug. 1, 1952.

While spearheading an attack to secure “Old Baldy,” Espinoza’s unit was pinned down by withering artillery, mortar, and small-arms fire from strongly fortified positions. Fully aware of the odds against him, Espinoza stormed forward in a daring assault and, firing his rifle and throwing grenades, silenced a machine-gun and its crew. Continuing up the fire-swept slope, he neutralized a mortar, wiped out two bunkers, and killed its defenders. After expending his ammunition, he employed enemy grenades, hurling them into the hostile trenches and inflicting additional casualties. Observing a tunnel on the crest of the hill, which could not be destroyed by grenades, he obtained explosives, entered the tunnel, set the charge, and destroyed the tunnel and the troops it sheltered.

His fearless display of valor inspired all who observed him and enabled the unit to continue the assault and to secure the strong-point.

Espinoza is set to receive the Medal of Honor posthumously in a ceremony at the White House on March 18.