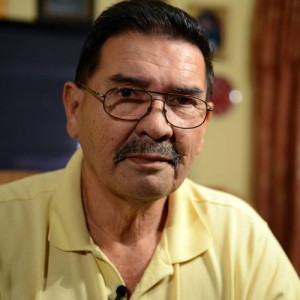 Medal of Honor nominee Sgt. Santiago Erevia was born in Nordheim, Texas, in 1946.

He volunteered to join the U.S. Army in San Antonio when he was 22-years-old.

Then-Spc. 4 Erevia distinguished himself May 21, 1969, while serving as a radio-telephone operator during a search-and-clear mission near Tam Ky City, in the Republic of Vietnam.

In 1970, Erevia left active service with a two year reserve obligation. In 1972 he joined the Texas National Guard and went on to serve 17 years. Erevia also found employment with the U.S. Postal Service; after 32 years of public service there, he retired in 2002.

Erevia has four grown children and lives in San Antonio with his wife. These days he enjoys refurbishing his home and walking to stay fit.

Spc. 4 Santiago Jesse Erevia, United States Army, distinguished himself by conspicuous gallantry and intrepidity at the risk of his life and beyond the call of duty while serving as a radio telephone operator in Company C, 1st Battalion (Airmobile), 501st Infantry, 101st Airborne Division (Airmobile). Specialist Erevia’s company was engaged in a search and clear operation near the city of Tam Ky in Quang Tin Province, 1st Tactical Corps of the Republic of Vietnam. The mission of Company C on May 21, 1969, was to sweep south through the valley and foothills from BT175117 toward Company B, thus forcing any hostile forces toward the perimeter set up by Company B.

At approximately 10:30 a.m., Company C became aware of the enemy contact to its immediate front. Deploying into a circular perimeter, Company C came under harassing sniper fire from a tree line across the rice paddy to its front. It was soon learned that elements of Company B were engaged in contact with North Vietnamese Army regulars on the adjacent hillside. Company E (Reconnaissance Platoon) and Company D soon arrived to aid Company B in the assault. Throughout the day there was light skirmishing between Company C and elements of the enemy force across the open rice paddy to the front.

At approximately 4 p.m., the order was given for Company C to attack the hill from the north. Leaving one platoon behind to secure the company perimeter, two platoons of Company C and the company command element, after aligning themselves along a wood line to the front, stepped into the open and began to assault the enemy positions on the hillside across the open rice paddy to the front. Issuing forth an intense amount of fire, Company C pushed across hundred of meters of open rice paddy to the cover of the hillside and the enemy positions, while only sustaining two casualties.

Arriving at the hillside, the platoon leaders immediately began to maneuver their platoons against the insurgent positions employing fire and movement techniques. Heavy contact with the enemy was made immediately and Company C suffered numerous casualties as a result of the intensity of the battle. Erevia, second platoon sergeant’s radio operator, had joined his old squad after his Platoon Sergeant had left the battle with head and back wounds. He was designated by his Platoon Leader to give aid to four of his wounded comrades while the rest of the platoon pushed forward against the insurgent.

Although Erevia could have taken cover with the rest of the group, he realized that action must be taken immediately if they were able to be relieved from the precarious situation they were now in. With bullets striking all around him, he proceeded to crawl from wounded to wounded gathering up weapons and ammunition.

Armed with two M-16 rifles and several hand grenades, Erevia, issuing forth a heavy volume of fire, moved in on the line of enemy bunkers. Under a hail of enemy fire, he continued to advance until he reached a location a few feet short of the first insurgent position. Disregarding the fire directed at him from the remaining bunkers, he pulled the pin on a hand grenade and advanced on the bunker, firing his rifles until he dropped the grenade into the bunker, thus destroying the fortification and killing the enemy soldier within.

By this time, he was the primary target of the enemy gunners. Without hesitation, he proceeded to maneuver his way through the intense enemy fire toward the second bunker. He again leveled a heavy volume of fire at the well-camouflaged position as he advanced. With enemy rounds impacting all around him, he completely silenced the second bunker by accurately throwing a hand grenade at the position. After reloading his rifles, he advanced toward the third bunker behind the suppressive fire emitted from his weapons. He also successfully eliminated this position, despite the intense enemy fire directed at him, by the effective employment of hand grenades.

After silencing the third bunker, Erevia had depleted his supply of hand grenades. Therefore, employing both M-16 rifles, he charged forward placing intense suppressive fire on the fourth enemy position. Arriving at the very edge of the bunker, he shot the North Vietnamese Army soldier positioned within in the head at point blank range.

Having silenced the four enemy positions threatening the lives of the four wounded, the company commander, and his fellow comrades in the company command element, which was also close by, Erevia returned to aid in treating and evacuating the dead and wounded from his company. In the meantime, elements of Company C had overrun the insurgents in numerous places and due to the intensity of the struggle, they had sustained several casualties. Shortly afterwards, Company C, with darkness approaching rapidly, withdrew from the hillsides to the safety of the night defensive perimeter set up by Company B, Company D, and Company E to evacuate their dead and wounded and take resupply.

Erevia is set to receive the Medal of Honor posthumously in a ceremony at the White House on March 18.