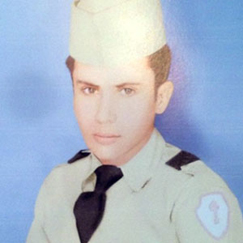 Vera joined the U.S. Army when he was 17 years old.

Vera is being recognized for his heroic actions at Chorwon, Korea, Sept. 21, 1952. While Vera’s unit attempted to retake the right sector of “Old Baldy”, they came under heavy fire at close range and were forced back. Vera selflessly chose to stay behind and cover the troop’s withdrawal, and lost his life during this action.

The President of the United States of America, under the provisions of the Act of Congress approved, July 9, 1918, takes pride in presenting the Distinguished Service Cross (Posthumously) to Pvt. Miguel A. Vera, United States Army, for extraordinary heroism in connection with military operations against an armed enemy of the United Nations, while serving with Company F, 2nd Battalion, 38th Infantry Regiment, 2nd Infantry Division. Vera distinguished himself by extraordinary heroism in action against enemy aggressor forces at Chorwon, Korea, on Sept. 21, 1952.

On that date, Vera’s unit was committed to assault and secure the right sector of “Old Baldy” and, although wounded in an earlier engagement, he voluntarily rejoined elements of the platoon regrouping at the base of the hill to resume the attack. Forging up the bare, rocky slope in skirmisher formation, the troops came within twenty yards of hostile positions when they were subjected to heavy artillery and mortar barrages and intense cross-fire from automatic weapons and grenades, which forced them to move back. He selflessly remained behind to cover the withdrawal and, maintaining a determined stand, poured crippling fire into enemy emplacements. During this action he lost his life.

Vera is set to receive the Medal of Honor posthumously in a ceremony at the White House on March 18.