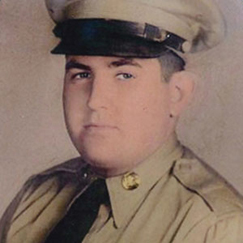 Medal of Honor nominee Leonard M. Kravitz was born in Brooklyn, N.Y., in 1931.

Kravitz is being recognized for his actions in Yangpyong, Korea, March 6-7, 1951. While occupying defensive positions, Kravitz’s unit was overrun by enemy combatants and forced to withdraw. Kravitz voluntarily remained at a machine-gun position to provide suppressive fire for the retreating troops. This forced the enemy to concentrate their attack on his own position. Kravitz ultimately did not survive the attack, but his actions saved his entire platoon.

The President of the United States of America, under the provisions of the Act of Congress approved, July 9, 1918, takes pride in presenting the Distinguished Service Cross (Posthumously) to Pfc. Leonard M. Kravitz, United States Army, for extraordinary heroism in connection with military operations against an armed enemy of the United Nations, while serving with Company M, 3d Battalion, 5th Regimental Combat Team, attached to the 24th Infantry Division.

Kravitz distinguished himself by extraordinary heroism in action against enemy aggressor forces in the Republic of Korea near Yangpyong, Korea, March 6-7, 1951. On that date, Kravitz, an assistant machine-gunner attached to Company L, was in a defensive position on strategic key terrain. After the friendly elements had repulsed two earlier probing attacks, the enemy launched a fanatical banzai charge with heavy supporting fire and, despite staggering losses, pressed the assault with ruthless determination. When the machine-gunner was wounded in the initial phase of action, Kravitz immediately seized the weapon and poured devastating fire into the ranks of the onrushing assailants. The enemy effected and exploited a breach on the left flank, rendering the friendly positions untenable. Upon order to withdraw, Kravitz voluntarily remained to provide protective fire for the retiring elements. Traversing the gun to the left to cover the infiltrating enemy and ignoring the pleadings of his comrades to fall back, he fearlessly maintained his position. Detecting a column of Communist troops moving toward friendly positions, he swept the hostile soldiers with deadly, accurate fire, killing the entire group. His destructive retaliation caused the enemy to concentrate vicious fire on his position and enabled the friendly elements to effect a withdrawal. After the strong point was re-secured, Kravitz’ body was found lying beside the gun he had so heroically manned, and numerous enemy dead lay in and around his emplacement. Kravitz’ incredible display of valor set an inspiring example for his comrades. His unflinching courage and consummate devotion to duty reflect the highest credit on himself and uphold the finest traditions of the military service.

Kravitz is set to receive the Medal of Honor posthumously in a ceremony at the White House on March 18.