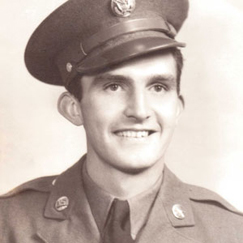 He joined the U.S. Army upon graduation from high school.

Schwab distinguished himself by exceptionally valorous actions on Sept. 17, 1944. His courage and determination resulted in the dismantling of a strong German position and he would take one prisoner of war.

Schwab served with the US Army until Oct. 26, 1945. Upon exiting the service Schwab returned to Hooper, Neb. and began a farming career. He later was employed with the postal service in Nebraska until retirement. In Hooper, Schwab was highly active in the church and community. He also enjoyed sports and played on various local softball and basketball teams.

1st Lt. Donald K. Schwab, Infantry, Company E, 15th Infantry, for extraordinary heroism in action. On Sept. 17, 1944, at about 2 p.m. near Lure, France, Schwab led his company over 400 yards of bare, coverless ground against a formidable line of machine-guns and machine-pistols. Meeting intense, grazing fire, which burst without warning from a fringe of woods directly to his front, Schwab extricated his men from the attempted ambush and led them back to a defiladed position.

Ordered to overwhelm the enemy line, he organized his men into a skirmish line and, with indomitable courage, again led them forward into the lethal enemy fire. When halted a second time, Schwab went from man to man to supervise collection of the wounded and organize the withdrawal of his company.

From defilade, he rallied his decimated force for a third charge on the hostile strong-point, worked his way to within 50 yards of the Germans and ordered his men to “hit the dirt.” While automatic weapons fire blazed around him, he rushed forward alone, firing his carbine at the German foxholes, straight for the key enemy machine pistol nest which had sparkplugged German resistance and caused heavy casualties among his men. Spotlighted through the mist and rain by enemy flares, he reached the German emplacement. Ripping off the shelter-half cover of the hostile firing pit, he clouted the German gunner on the head with his carbine butt and dragged him back, through a hall of fire, to friendly lines.

His action so disorganized hostile infantry resistance that the enemy withdrew, abandoning his formidable defensive line. Schwab’s gallantry and determination to carry on related in breaking a powerful German position.

Schwab is set to receive the Medal of Honor posthumously in a ceremony at the White House on March 18.