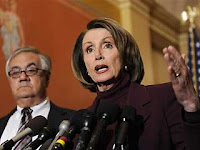 To the sum of $14 billion, and a House vote of 237-170, the “bridge loans” to the automakers was passed. However, it is said that it will face tougher opposition by Senate Republicans.

Opposition is not limited to only Republicans, House Democrats are also opposed to this bill. Fox News reports that:

Democratic Sen. Max Baucus of Montana announced he was against the measure because of a provision to bail out transit agencies. The bus and rail systems could be on the hook for billions of dollars in payments because exotic deals they entered into with investors — which have since been declared unlawful tax shelters — have gone sour.

The voice of some House Republicans, Fox News reports that:

House Republicans swiftly voiced their opposition and called for a plan that would instead provide government insurance to subsidize new private investment in the Big Three automakers, demand major labor givebacks and debt restructuring at the companies, and encourage them to declare bankruptcy.

With an encouragement to declare bankruptcy, $14 billion of taxpayer money would not be put into jeopardy to keep these failed business models afloat. However, many would speculate that, come March 2009, they may opt for that choice if they provide no clear progress.

But, then again, most of the House members felt it was neccesary to pass this Bill to claim a pay-raise for federal judges that was written in.

A copy of the Bill is provided here: