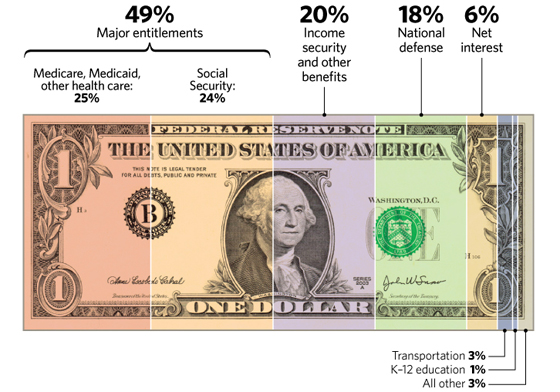 Have you ever wondered just where and what your 2013 taxes were spent on?

The illustration below can help shed some light on this. According to the Office of Management and Budget, 49% went to Medicare, Medicaid and Social Security. Sadly, we spend more on transportation than we do on education. Education is a measly 1%.

Drudge Pays Obamacare Penalty And The Attacks Roll In (via http://www.newsninja2012.com)

END_OF_DOCUMENT_TOKEN_TO_BE_REPLACED

At a time when the nation has nearly $17 trillion in national debt and is running annual trillion-dollar budget deficits, largely attributed to existing entitlements, Obamacare creates two new entitlements projected to cost nearly $1.8 trillion over the next decade.

While Obamacare is technically scored by the Congressional Budget Office CBO as a deficit reducer, when rational assumptions are made and budget gimmicks are omitted, the law is far from paid for, likely increasing future budget deficits and further burdening current taxpayers and future generations.

The two main coverage components of Obamacare are a massive Medicaid expansion and new government subsidies to purchase coverage in the government-run state exchanges. The new spending on these provisions will cost taxpayers nearly $1.8 trillion from 2014 to 2023.

Obamacare’s new spending is offset in part by the imposition of 18 new taxes and penalties. The CBO and the Joint Committee on Taxation project that Obamacare’s taxes will raise $771 billion in new government revenue from 2013 to 2022. The taxes have been phased in since the law’s passage, with a few still waiting to start.

Another major source of funding for Obamacare’s new entitlement spending comes from Medicare. Obamacare reduces Medicare reimbursements by an estimated $716 billion from 2013 to 2022, and that money is counted by the CBO as an offset for some of the law’s new spending.