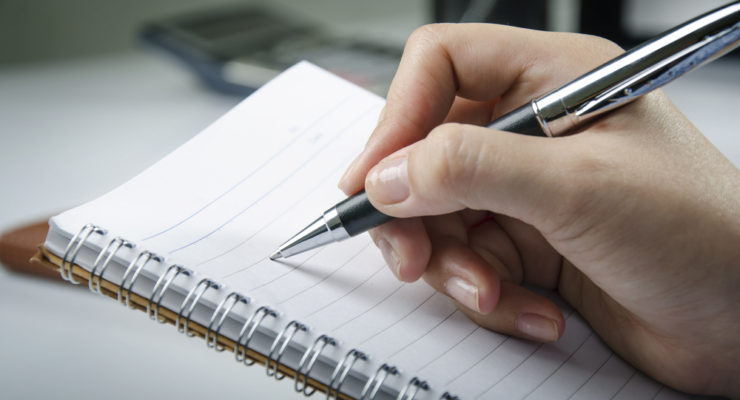 I tend to skim over a lot of articles and posts throughout the course of a day. The ones that stand out as something I want to spend more time on, I save a link in Google Keep. (Don’t ask me why because I have yet to fully understand it myself.) My intention is to review these in the evening or over the weekend when I have a little more time to digest them.

I was trying to decide how I wanted to go about tackling a post about Warren Buffet, when I saw a note-taking article I saved. As I clicked on the link, an Amazon truck pulled up to drop off another load of books I ‘accidentally’ ordered. To my surprise, when I opened the package, it was for a book on note-taking.

That’s enough of a nudge to know that some force in nature was wanting me to work on something about taking notes.

In my hands, I’m holding a new book about how to take smart notes in one hand, and my phone with the article, “A Better Note-Taking System for Your Scattered Brain” by Ria Tagulinao.

Her teaser for the post says that the “‘Four Mind Banks’ can help you process information in a simple, engaging way.” (It’s now that I’m remembering why I saved this article to dig a little deeper.)

Ria discussed how she had recently started a new job where she was ‘constantly bombarded with new and unfamiliar concepts.’ And, that during meetings, she was finding herself taking a ton of notes ‘trying to soak in as much information as possible.’

Let’s be honest. There are a handful of note-taking systems, devices, and apps that can handle whatever gets thrown its direction. And, yet, it seems none of them worked for Ria.

During a meeting, she realized that her mind was trying to sort through four things at the same time:

So, she created a framework to help her capture notes and sort out her thoughts and calls it the ‘Four Mind Banks system.’

Here’s how she says it works: You divide a sheet of paper into four quadrants – or banks if you will – and record your thoughts and feelings in each respective section.

This is basically anything noteworthy to include high points, facts, quotes, and any other key takeaways.

This is for things you want to dig deeper on. If there was something you don’t understand, this would be the place to ask yourself a question to be answered at a later time.

These are your light-bulb moments. If you think of a new idea or concept, this would be the place to record them for further expansion.

This is your holding cell for your emotions and reactions. (There’s an interesting link between how we feel when we learn something for the first time and how we retain that knowledge.)

To sum all of this up… it seams like a lot of extra busy work for someone who is already feeling under the pressure. Either that, or their scatter brain is far worse than they imagine and yet they are willing to feed the monkey mind.

This system can easily be incorporated into something much more simpler in my opinion. It would all take place in the review phase. You do review your notes afterward, right?

If I learned one thing from my few years in the Army, it’s the power of the After Action Review (AAR). When you would complete a mission or higher level task, you take time to review and reinforce what you learned and experienced.

During your AAR of your notes, you could highlight those things that raised questions, created those light-bulb moments, or even draw a little emoji to express your reactions and/or feelings.

Again, I can understand Ria’s intentions, and rightfully so, create a system that works for you. However, this ‘Four Mind Bank system’ is quite energy-sucking and would be somewhat of a distraction for most people.