So the Supreme Court rules in favor of religious freedom and those on the Left go nuts? Were they looking for permission, because they’ve never really asked before. And with such unintelligible attacks, one really has to ponder what they think they’re trying to achieve.

Even if they are trying to just throw it in your face, they need to head back to class and study up a little. Their argument is invalid!

In this episode, I talk about the insanity within the GOP, the Supreme Court ruling on aggregate campaign funding, and why some on the Left are wanting Supreme Court Justice Ginsburg to retire.

Power Quote of the Week

Insanity within the GOP

Pressure on Ginsburg to retire

music provided in this podcast is in thanks to:

Abortion Mandate Under Review by Supreme Court (via http://www.newsninja2012.com)

The Supreme Court took to hearing arguments over the controversial abortion mandate forcing employers to provide health coverage that goes against their religious beliefs. At the heart of the case rests Obamacare, as it places certain criteria on insurance…

END_OF_DOCUMENT_TOKEN_TO_BE_REPLACED 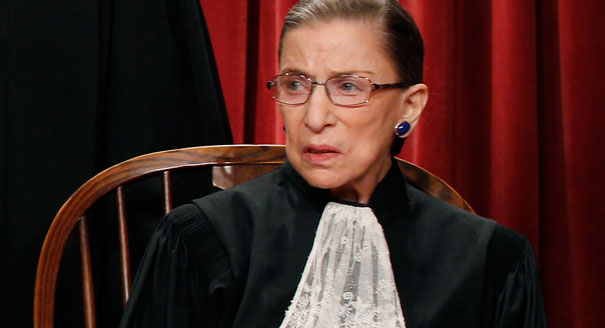 Supreme Court Justice Ruth Bader Ginsburg is the oldest sitting member of the high court and is being targeted to step down and retire.

The Supreme Court is usually the last place you would expect someone to be pressured to give it up and retire. Add to that, Liberals are calling one of their own to step down.

So, why all the pressure for Justice Ginsburg to retire? Even then, Why are liberals calling for her to retire?

Think about it. It follows their strategy in order to control the court. They want her to step down so a young, highly liberal judge can be appointed. They did it with Sotomayor and Kagan. Those two will be there for a while.

The last thing liberals want is for her to get replaced by a republican as president. That would more than likely lead to a more conservative judge. Which in turn, would sway the courts to be more conservative in their rulings. Wednesday the Supreme Court overwhelmingly ruled in favor of the controversial Topeka, KS Westboro Church. With the 8-1 ruling, it has echoed across the United States in such a fashion that people are almost as outraged at the Court as they are with the picketing and hateful speech.

This ruling however, probably should have never made it to the Supreme Court. It should have been a cut and dry ruling in favor of Westboro. And, while a super-majority of the American people disagree with that, they do certainly have the right to free speech so long as it is on public property. If it was on private property, this ruling could have swayed the other way.

Justice Samuel Alito, the lone dissenter, said Snyder wanted only to “bury his son in peace.” Instead, Alito said, the protesters “brutally attacked” Matthew Snyder to attract public attention. “Our profound national commitment to free and open debate is not a license for the vicious verbal assault that occurred in this case,” he said.

However, this ruling does fall in line with previous court decisions.

“The bedrock principle underlying the First Amendment,” Roberts said, quoting the flag-burning ruling by liberal icon William J. Brennan Jr., is that the government cannot punish words or ideas “simply because society finds the idea itself offensive or disagreeable.”

If you wish to read the entire Supreme Court ruling on the case, click HERE. (PDF)

There’s been much controversy in recent weeks over the issue of full body scans and pat-downs at airport security checkpoints across America.  Individuals from all points on the political and ideological spectrum are angry and speaking out against practices that they assert violate civil liberties and undermine human dignity.  Much in the same way that the Patriot Act thrust the “privacy v. security” conundrum into the foreground of the public’s attention, the kerfuffle begun by John “Don’t Touch My Junk” Tyner has ignited a national debate about how far our society is willing to go to ensure the safety of air travel in America.  President Obama, for his part, acknowledges the inconvenience posed by the new TSA procedures, but insists that they are necessary to ensure our safety in an era of pervasive terror threats.

Upon hearing the President’s rationalization of full body scans and vigorous pat-downs, I can’t help but be struck by this Administration’s inconsistent and unprincipled approach to personal privacy issues.  Ever since the Supreme Court issued the Griswold v. Connecticut decision in 1965, the American Left has vigorously defended the constitutional “penumbras” guaranteeing an individual “right” to privacy.  This understanding of individual privacy led the Court to decide in 1973 that a woman’s right to privacy trumps her unborn child’s right to life.

Just the same as California overturned Prop 8 ruling that gay marriage was legal, Mexico City followed suit as they were wrestling with the same issue. Before the Mexico Supreme Court was the issue of allowing gay marriage and its constitutionality. And in an 8-2 ruling, the justices ruled in favor of same-sex marriage.

“Men and women are equal before the law. This protects the organization and development of the family.”

After the ruling, reaction and explanation followed:

Supreme Court Justice Arturo Zaldivar said, “Those of us who are in favor of this (law) are in favor of diversity and tolerance. Our constitution does not establish a concept of marriage.”

Rev. Hugo Valdemar, the spokesman for Mexico City’s Roman Catholic Archdiocese, said “we regret this ruling because in our opinion, it affects the fundamental nucleus of the family.”

Justice Guillermo Ortiz, who argued against the law, said “marriage is reserved exclusively for couples who can procreate, because one of the big issues of marriage is the protection of children.”

Supreme Court Judge Salvador Aguirre Anguiano said, “In marriage, the invariable and eternal has been man and woman tied together with the real or unreal, realized or unrealized goal of procreation, but that idealizes the family as consisting of a man and a woman.”

With Elena Kagan being grilled and finally having to defend her past, there is a lot of information out there to take in. Here is some of what is being discussed:

Responding to Sen. Diane Feinstein (D-Calif.) this morning, Kagan confirmed her belief that “Roe (v. Wade) and Doe (v. Bolton) require” that any state “regulation” of abortion protect the “health” of women seeking abortion. Kagan isolated the Supreme Court’s holding in the 2007 case, Gonzales v. Carhart—which upheld the Partial-Birth Abortion Ban of 2003 without a “health” exception—by stating that the Gonzales decision only pertained to a particular abortion procedure.

In her testimony, Kagan suggested that her policy shift did not impose a hardship on military recruiters.

She said that she felt an obligation to reverse the military-recruiting policy as a means to uphold the school’s antidiscrimination stance and protect gay and lesbian students.

“Isn’t it a fact,” Sessions asked, “that you were acting in violation of Harvard’s agreement [with the Pentagon on military recruiting] and the law when you reversed the policy?”

Kagan disagreed. “We were never out of compliance,” she said. “Nobody ever suggested that Harvard should be sanctioned in any way.”

Al Franken, the onetime comedian and current Democratic senator from Minnesota, used his position on the vaunted Judiciary Committee on Tuesday to doodle a lifelike bust of Sen. Jeff Sessions, the committee’s ranking Republican, as Sessions raked Supreme Court nominee Elena Kagan over the coals.

But it wasn’t all fun and games for the former “Saturday Night Live” star — Franken also found time to get in a good nap during the first day of hearings Monday.

Ms. Kagan’s responses, during a long and sometimes tense day of parrying with members of the Senate Judiciary Committee, were similar to those of Supreme Court nominees past. But unlike her predecessors, Ms. Kagan wrote a 1995 article calling for judicial nominees to be more forthcoming. On Tuesday, minutes into her testimony, she backpedaled, saying she now believed it would be inappropriate even to answer questions that might “provide some kind of hints” about her views on matters of legal controversy.

“I think that that was wrong,” she said. “I think that — in particular, that it wouldn’t be appropriate for me to talk about what I think about past cases — you know, to grade cases — because those cases themselves might again come before the court.”