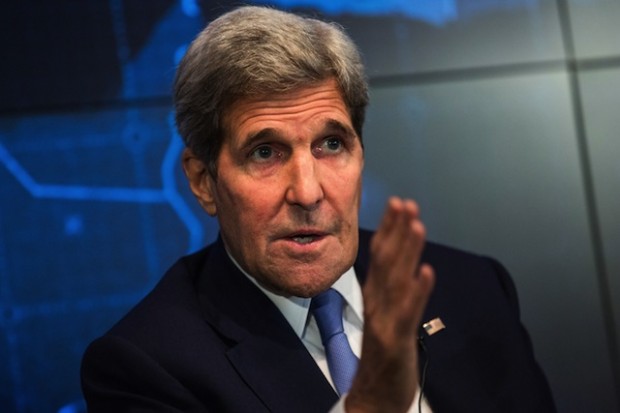 It’s no secret that Obama and many of his cronies want the Iran deal to be the law of the land. And now they are out trying to scare the American public into supporting it as well.

John Kerry said, “That is a recipe very quickly, my friends, businesspeople here, for the American dollar to cease to be the reserve currency of the world – which is already bubbling out there.”

This statement should be alarming to many people.

For many years now, some of us have been giving warning to the workings of other countries wanting to move away from the US dollar. This is one of the reasons, if not the only reason, for the alliance of BRIC (Brazil, Russia, India, and China).

When you look at two of the names listed, you should start to wonder.

Russia and China. Plain and simple, they want nothing more than to move away from the dollar. And, they are seeing this as another way to make that happen.

The Obama administration is playing fool and supporting the push to a bad Iran deal.

Remember when Nancy Pelosi said we needed to pass Obamacare to find out what’s in it? The same thing is happening with the Iran deal.

A few days ago, the South Korean island of Yeonpyeong, was hit with artillery from its neighbor North Korea. Which resulted in the deaths of two South Korean soldiers and two civilians. This attack was seen as a demonstration against the joint military exercise between the US and South Korea staged in the Yellow Sea.

However, it appears that there could be more to it. You see, there is a regime change that will soon take place in the North. This is more likely that it is the doing of the incoming regime as a test to see if the military will follow new command. Especially when state controlled Korean Central News Agency responded Friday saying, “The situation on the Korean peninsula is inching closer to the brink of war.”

A war that neither party, including China or Japan, would invite. Seeing as China is seen as an ally to North Korea, they would be a definite thorn at the side of US support to the South. A showdown that could be devastating to the US naval fleet.

How so? Despite the fact that the US has the most advanced systems, they are still vulnerable. With the nuclear-powered US carrier, the USS George Washington, with more than 6000 sailors and 75 fighter jets aboard, and being in the backyard of the Chinese, its loss would be a catastrophic loss. After all, the Chinese have proven their ability to roam the seas undetected.

Do you remember the contrail that was in question the other week? Many top analysts claim it was a missile from a Chinese submarine. However, the Chinese would position themselves, you could wager they are already in position on both sides of the peninsula. With two Chinese fishing patrol ships spotted by the Japanese coast guard off a group of islands, you can bet they are positioned for an attack on either direction.

But, there are heavy propositions for talks coming from China as it is their latest move to calm tensions. Wu Dawei, Chinese special representative for the Korean Peninsula affairs said, “The Chinese side, after careful deliberation, proposes emergency consultations among the heads of delegation to the Six-Party Talks in early December in Beijing to exchange views on major issues of concern to the parties at present.”

Good afternoon, everybody.  We have just concluded an enormously productive day. I said this morning that today would be an opportunity for our nations, both individually and collectively, to make concrete commitments and take tangible steps to secure nuclear materials so they never fall into the hands of terrorists who would surely use them.

This evening, I can report that we have seized this opportunity, and because of the steps we’ve taken — as individual nations and as an international community — the American people will be safer and the world will be more secure.

I want to thank all who participated in this historic summit — 49 leaders from every region of the world.  Today’s progress was possible because these leaders came not simply to talk, but to take action; not simply to make vague pledges of future action, but to commit to meaningful steps that they are prepared to implement right now.

I also want to thank my colleagues for the candor and cooperative spirit that they brought to the discussions.  This was not a day of long speeches or lectures on what other nations must do.  We listened to each other, with mutual respect.  We recognized that while different countries face different challenges, we have a mutual interest in securing these dangerous materials.

So today is a testament to what is possible when nations come together in a spirit of partnership to embrace our shared responsibility and confront a shared challenge.  This is how we will solve problems and advance the security of our people in the 21st century.  And this is reflected in the communiqué that we have unanimously agreed to today.

A fact sheet about the summit (PDF)