You are here: Home / Politics / Miscellaneous / Are We Really That Much More Informed?

We’re told that we live in the age of information. We literally have all the information of the world at our fingertips. You’re likely even reading this on your little cellular device. However, in today’s day of information, are we really that much more informed?

It’s a question raised when I stumbled upon a post over at The Hill that started out saying: “Just a few decades ago, citizens who wanted to stay on top of the daily news had a narrow range of options. They could read a newspaper, watch an evening network newscast, or maybe just have a conversation with a trusted neighbor or co-worker. Today, the digital world today has created a Wild West of information resources.”

Can we take just a second to marvel at the notion of how far we’ve come? There was a day where the only way you consumed news and information was via newspapers. Then, along came the radio. A magical little box that, at the time, transformed our world as we knew it. Finally, we had a voice to go along with the story. What next, picture? Yes. Talk about a game-changer. When the television came into play, it almost rendered the radio obsolete. No longer was it good enough to only get to hear; we needed to be able to see it for ourselves.

Fast forward a few years to the present where we now hold all of that power in the palm of our hands. With just our cell phones, we can get print, sound, and video. If that’s not enough, we can even produce all three of those options with the same device. And, on top of that, we’ve added the social aspect. We can communicate with anyone in the world at any given moment of any given day.

So, let me ask again, are we really all that more informed?

Take a look at this chart of where people are getting their so-called news:

This chart shows that the two biggest social media sites, Facebook and Twitter, are among the most used sites for getting news. Is it not interesting that people are using social media sites to consume their news?

We used to be able to only get out news from newspapers, radio/TV, and word of mouth. And, it was those traditional sources that decided what was relevant to talk about. Only the media sources had the power to decide what was important and what wasn’t.

So, should it alarm you that roughly two-thirds of adults are getting news from social media and other online sources? Yes and no. Yes, because it holds those traditional media sources accountable. Think about it, because we have the ability to fact-check with a palm-sized device that we all possess, we can determine the validity of the news at that very second. But, there is a flip side to everything. As easy as it is to do that, we also have ease of access to be able to post whatever we want and label it as news. It then has the ability to spread like a wildfire simply because, well, it’s social media and if it’s on there it has to be true. 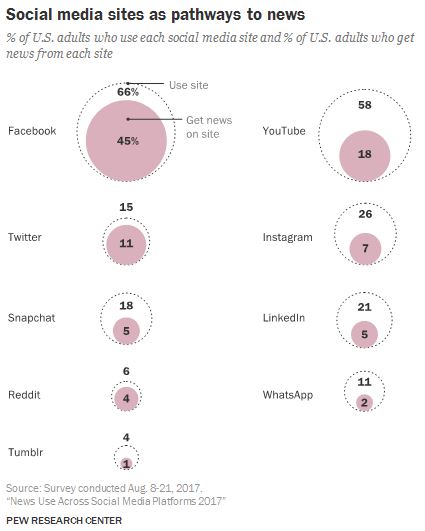 This chart illustrates just what people are consuming on so-called social sites. And, in fact, a large part of what they are getting is the news. They get the news and share it. And, if enough people do in a short amount of time, it stands a chance of going viral. At that point, traditional means of news media would pick up on it and run it as news.

This begs us to look at our original question: Are we really all that more informed?

We do live in a time where we have more access to more information at one time than at any other time. However, when you add in the speed at which ‘news’ can be shared and liked, it adds an entirely new dimension to the equation.