You are here: Home / Podcast / Who’s Guarding the Guards? [PODCAST]

In this episode, I discuss the question that has been brought up by various political thinkers: Who’s guarding the guards? 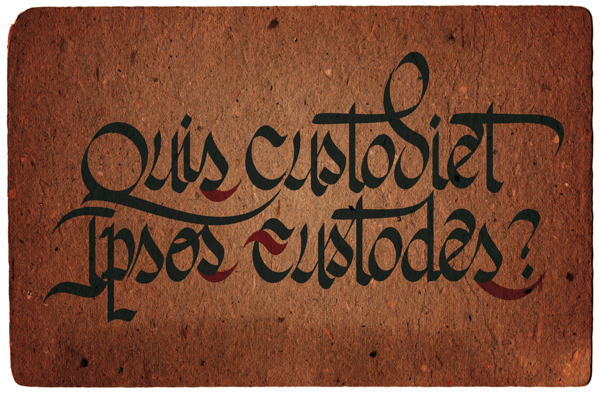 Back in 1756, Edmund Burke contemplated a question on political theory. The question that he was asking came from 1st or 2nd century Latin poetry. Since then, it has been a source of inspiration for Plato, Cicero and Socrates. (All of which were influential in the thinking of Burke.) What he said was:

I have defended Natural Religion against a Confederacy of Atheists and Divines. I now plead for Natural Society against Politicians, and for Natural Reason against all three. When the World is in a fitter Temper than it is at present to hear Truth, or when I shall be more indifferent about its Temper; my Thoughts may become more publick. In the mean time, let them repose in my own Bosom, and in the Bosoms of such Men as are fit to be initiated in the sober Mysteries of Truth and Reason. My Antagonists have already done as much as I could desire. Parties in Religion and Politics make sufficient Discoveries concerning each other, to give a sober Man a proper Caution against them all. The Monarchic, Aristocratical, and Popular Partizans have been jointly laying their Axes to the Root of all Government, and have in their Turns proved each other absurd and inconvenient. In vain you tell me that Artificial Government is good, but that I fall out only with the Abuse. The Thing! the Thing itself is the Abuse! Observe, my Lord, I pray you, that grand Error upon which all artificial legislative Power is founded. It was observed, that Men had ungovernable Passions, which made it necessary to guard against the Violence they might offer to each other. They appointed Governors over them for this Reason; but a worse and more perplexing Difficulty arises, how to be defended against the Governors? Quis custodiet ipsos custodes? (Which translates to “Who will guard the guards themselves?”) In vain they change from a single Person to a few. These few have the Passions of the one, and they unite to strengthen themselves, and to secure the Gratification of their lawless Passions at the Expence of the general Good.

Too many people out there think they have power that they really don’t have. Take for instance, a parent who sends their child to school with a lunch that doesn’t meet the lunch standards because there were Oreo cookies packed. Or a father who calls out their child from school to go on a family trip, only for the principle to decline the request and say that it would be recorded as unexcused. People are walking a fine line with how much power they have versus how much they don’t. Which, takes us back to the original question: Who’s guarding the guards?

We all got bills to pay right? Well… so does Bill Clinton. At least that’s what he said.