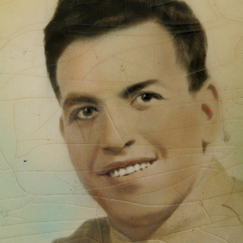 He joined the U.S. Army and served during World War II.

Then-Pfc. Salvador Lara is being recognized for his valorous actions in Aprilia, Italy, May 27-28, 1944. During the fight, May 27, he aggressively led his rifle squad in neutralizing multiple enemy strong points and inflicting large numbers of casualties on the enemy. The next morning, as his company resumed the attack, Lara sustained a severe leg wound, but did not stop to receive first aid. Lara continued his exemplary performance until he captured his objective.

During an attack on strongly fortified enemy positions, Staff Sgt. Lara (then a Private First Class) led his rifle squad aggressively in neutralizing one enemy strong-point after another and in killing large numbers of the enemy. Having taken his initial objective, Lara observed that the unit on his right was meeting stiff resistance from a large enemy force, well entrenched in a deep ditch. Taking three men with him, he attacked a wide section of the enemy position, killing four of the enemy, forcing 15 others to surrender, and causing two enemy mortar crews to abandon their weapons.

His fearless and efficient performance enabled his own unit, as well as the unit on his right to continue their objective. When his company resumed the attack the following morning, Lara sustained a severe leg wound, but did not stop to receive first-aid, saying that his men needed him in the attack. His company suffered heavy casualties as a result of withering machine-gun fire coming from an enemy strong-point on the right flank. Requesting permission to take a Browning automatic rifle and attempt to destroy the enemy machine-guns, Lara crawled alone toward the nearest machine-gun, manned by three determined Germans.

Despite his painful wounds and the extreme danger of the task, Lara rose and unhesitatingly charged the nest, killing the three crew members. Another machine-gun opened fire on him, but he quickly neutralized this weapon with accurate fire from his BAR and killed three more enemies. His aggressive attack forced two other machine-gun crews to flee their weapons. After rejoining his company, Lara continued his exemplary performance until he captured his objective.

Lara is set to receive the Medal of Honor posthumously in a ceremony at the White House on March 18.