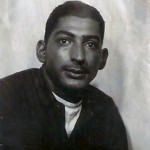 Alvarado distinguished himself on Aug. 12, 1969, while serving as a rifleman during a mission to relieve a sister platoon, in Phuoc Long Province, Vietnam. Alvarado was killed in action after disrupting an enemy raid and saving the lives of several comrades, leaving behind his wife and young daughter.

For extraordinary heroism in connection with military operations involving conflict with an armed hostile force in the Republic of Vietnam: Spc.4 Leonard L. Alvarado distinguished himself by exceptionally valorous actions, Aug. 12, 1969, while serving as a rifleman during a mission to relieve a beleaguered sister platoon in Phuoc Long Province, Vietnam.

As he and other members of the small reaction force moved through dense jungle, Alvarado detected enemy movement and opened fire. Despite his quick reaction, he and his comrades were quickly pinned down by the hostile force that blocked the path to the trapped platoon. Alvarado quickly moved forward through the hostile machine-gun fire in order to engage the enemy troops. Suddenly, an enemy grenade exploded nearby, wounding and momentarily stunning him. Retaliating immediately, he killed the grenadier just as another enemy barrage wounded him again. He crawled forward through the fusillade to pull several comrades back within the hastily-formed perimeter. Realizing that his element must break away from the hostile force, he began maneuvering forward alone. Though repeatedly thrown to the ground by exploding satchel charges, he continued advancing and firing, silencing several emplacements, including one enemy machine-gun position. From his dangerous forward position, he persistently laid suppressive fire on the hostile forces, and after the enemy troops had broken contact, his comrades discovered that he had succumbed to his wounds.

Alvarado’s extraordinary heroism and devotion to duty, at the cost of his life, were in keeping with the highest traditions of the military service and reflect great credit upon himself, his unit, and the United States Army.

Alvarado is set to receive the Medal of Honor posthumously in a ceremony at the White House on March 18.