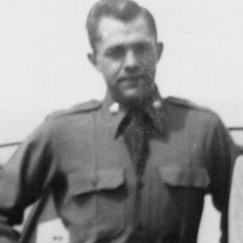 Weinstein is being recognized for his exceptionally valorous actions on Oct. 19, 1951, in the vicinity of Kumson, Korea, when his platoon came under enemy attack. He volunteered to stay back and provide cover while his men withdrew from their positions. Weinstein killed six enemy combatants and, after running out of ammunition, used enemy grenades around him to keep the enemy forces back. Weinstein held his position until friendly forces moved back in and pushed the enemy back.

After a year and a half in Korea, Weinstein returned home, married, and settled in Saint Francis, Kan. Weinstein and his wife had five children, nine grand-children, and four great-grand-children. Weinstein passed away, April 20, 2006.

On Oct. 19, 1951, near Hill 533, Sgt. Weinstein was in the lead as the first platoon of Company G attempted to take an enemy-held position. After gaining the ground, the platoon, consisting of two five-man squads, was hit by a fierce counter-attack by about 30 fanatical Chinese Communist troops. Most of the members of the platoon had been wounded in the previous action and withdrew under the heavy attack. Weinstein remained in his position and continued to fight off the onrushing enemy. At least six of the enemies were killed by Weinstein’s M-1 rifle before he ran out of ammunition. Although under extremely heavy enemy fire, he refused to withdraw and continued fighting by throwing enemy hand grenades which were lying near his position. Again, the enemy was stopped and suffered my casualties. Alone and unaided he held the ground his platoon had fought hard to take.

He held out against overwhelming odds until another platoon was able relieve him and drive-back the enemy. Weinstein’s leg had been broken by an enemy grenade and old wounds suffered in previous battles had reopened, but he refused to do withdraw in order that his wounded comrades could reach friendly lines.

His outstanding courage and complete disregard for his own life was an inspiration to his comrades and reflect great credit upon himself and is in keeping with the highest traditions of the United States Infantry.

Weinstein is set to receive the Medal of Honor posthumously in a ceremony at the White House on March 18.