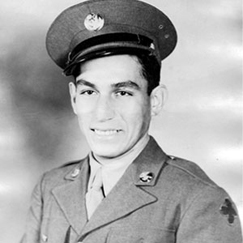 Mendoza entered the U.S. Army at Fort MacArthur, Calif., November 1942. He served in both WWII and Korea.

Then-Staff Sgt. Manuel Mendoza is being recognized for his actions on Oct. 4, 1944, in Mt. Battaglia, Italy, where he is credited with single-handedly breaking up a German counterattack.

Mendoza was nicknamed the “Arizona Kid” for his actions in combat. Following his Army career, Mendoza found employment as a foreman at one of the largest nuclear plants in the country. He passed away at age 79.

Staff Sgt. Manuel V. Mendoza distinguished himself by acts of gallantry and intrepidity above and beyond the call of duty while serving as a Platoon Sergeant with Company B, 250th Infantry, 88th Infantry Division, during combat operations against an armed enemy, on Mt. Battaglia, Italy, Oct. 4, 1944.

That afternoon, the enemy launched a violent counterattack preceded by a heavy mortar barrage. Mendoza, already wounded in the arm and leg, grabbed a Thompson sub-machine-gun and ran to the crest of the hill, where he saw approximately 200 enemy troops charging up the slopes employing flame-throwers, machine pistols, rifles, and hand grenades. Mendoza immediately began to engage the enemy, firing five clips and killing ten enemy soldiers. After exhausting his ammunition, he picked up a carbine and emptied its magazine at the enemy. By that time, an enemy soldier with a flame thrower had almost reached the crest, but was quickly eliminated as Mendoza drew his pistol and fired. Seeing that the enemy force continued to advance, Mendoza jumped into a machine-gun emplacement that had just been abandoned and opened fire. Unable to engage the entire enemy force from his location, he picked up the machine-gun and moved forward, firing from his hip and spraying a withering hail of bullets into the oncoming enemy, causing them to break into confusion. He then set the machine-gun on the ground and continued to fire until the gun jammed. Without hesitating, Mendoza began throwing hand grenades at the enemy, causing them to flee. After the enemy had withdrawn, he advanced down the forward slope of the hill, retrieved numerous enemy weapons scattered about the area, captured a wounded enemy soldier, and returned to the consolidated friendly positions with all available men. Mendoza’s gallant stand resulted in thirty German soldiers killed, and the successful defense of the hill. Mendoza’s extraordinary heroism and selflessness, above and beyond the call of duty, are in keeping with the highest traditions of military service, and reflect great credit upon himself, his unit, and the United States Army.

Mendoza is set to receive the Medal of Honor posthumously in a ceremony at the White House on March 18.