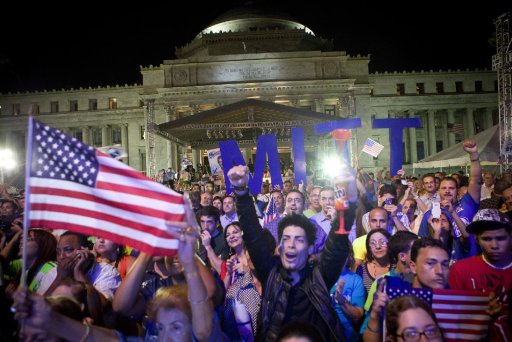 The votes are in, and Mitt Romney is the big winner in Puerto Rico.

He won so big that he will take all 20 delegates from the eventual 51st state.

After the Puerto Rico victory, Romney had 521 delegates in his camp and Santorum had 253, according to The Associated Press’ tally. Former House Speaker Newt Gingrich trailed with 136 delegates and Texas Rep. Ron Paul had 50.

Romney made the announcement while campaigning in Illinois.

However, the economy wasn’t the hottest topic for voters in Puerto Rico. It was statehood.

Which brings up the debate of declaring English the official language. But in Puerto Rico both Spanish and English are spoken, and with little difficulty says Francisco Rodriguez, a 76-year-old architect who supported Romney and hopes Puerto Rico becomes the nation’s 51st state.