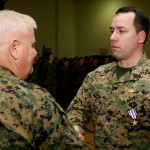 MARINE CORPS BASE CAMP LEJEUNE, N.C.  — “You hear your buddies go down …You close your eyes… You think about everything … You hear you’re the only other corpsman. What would you do?”

Chief Petty Officer Jeremy K. Torrisi, a hospital corpsman with U.S. Marine Corps Forces, Special Operations Command, faced that question June 26, 2008 in the mountains of Afghanistan during the fiercest firefight of his life.

Torrisi saved the lives of four of his comrades and received the Silver Star Medal at the Courthouse Bay Gymnasium on Jan 21.

So far, one Navy Cross, two Silver Star Medals, and two Bronze Star Medals with combat distinguishing devices have been awarded in the battle’s aftermath.

“I’m the one getting recognized today, but everybody knows, I hope, the story that went down that day; it wasn’t one person, it wasn’t two, it wasn’t three, it was everybody,” Torrisi said during the award ceremony. “Everybody doing their part. We have a lot of guys around today walking, talking, and breathing because of that. I was just part of the well-oiled machine that we were.”

Read about the battle HERE