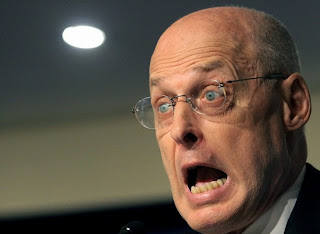 Henry Paulson, the Secretary of Treasury, could go down in history as the biggest fraud this nation has ever witnessed. Many would argue that he has and is robbing BILLIONS of money from not only Americans, but all accross the world. Millions and millions of people are seeing thier money disapear at an alarming rate.
So, here is a little of the history of Paulson and his scam.
Prior to May 2006: Employed as the CEO of Goldman Sachs.
May 2006: Left GS to serve as US Treasury Secretary.
Spring 2007: Told an audience at the Shanghai Futures that “An open, competitive, and liberalized financial market can effectively llocate scarce resources in a manner that promotes stability and prosperity far better than governmental intervention.”
August 2007: Explained that US subprime mortgage fallout remained largely contained due to the strongest global economy in decades.
July 20, 2008: After the failure of one bank, he reassured the public by saying, “it’s a safe banking system, a sound banking system. Our regulators are on top of it. This is a very manageable situation.”
August 10, 2008: Told NBC’s Meet the Press that he had no plans to inject any capital into Fannie Mae or Freddie Mac.
September 7, 2008: Fannie Mae and Freddie Mac went into conservatorship.
September 21, 2008: GS received Federal Reserve approval to transition from an investment bank to a bank holding company.
October 3, 2008: US Government passes “Bailout Bill”
Now it’s time to ask a few questions!
What is next?
What is the REAL plan?
What is the REAL motive behind Henry Paulson?
If anything should be added to this timeline for fraud, please feel free to comment.
http://en.wikipedia.org/wiki/Henry_Paulson
http://en.wikipedia.org/wiki/Goldman_Sachs