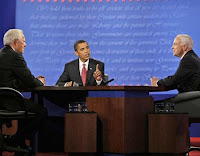 McCain hammers Obama on what he talked about to Joe the plumber.
Obama falls back to talking points about his “95% tax cut”. He tries to spin what he said to Joe the plumber.
McCain discusses Obama’s plan about spreading the wealth.
Obama falls back on “95% tax cut”. Says that the rich can afford to pay a little more in taxes.
McCain wants to cut taxes to encourage businesses.

Obama says that he would make “adjustments” to the bailout bill. (Why didn’t he press for changes when it was debated before it was passed?) Wants to cut programs, but invest more in others.
McCain wants energy independence that would also create jobs. Govn’t spending has gotten out of control. Discusses and lists some programs that would get cut, and discusses how he would fight for line item veto and earmarks.
Obama wants to work on earmarks now too.
McCain says he can fix the budget. Tells Obama that if he wanted to run against Bush, then he should have run for office four years ago. Talks about what Obama voted for that himself voted against. McCain lays it out against Obama about the differences with Bush.
Obama talks about things he supports. Tries to go back to Bush.
McCain talks about some things he voted for.

Obama talks about Biden saying how good he is and how hard he has worked his whole life.
McCain talks about Palin and how she is a reformer who will help clean out the good ‘ol boys in Washington.
Obama doesn’t answer whether she is ready to take over the presidency.
McCain says he thinks Biden would be capable but talks about their differences. Hammers Obama about how much he would spend.

Obama gives talking points about health care. Says health care will cost on the front end.
McCain lays out points that he would do to help prevent high costs. Still wants to know what the fine is for not having health care under Obama plan.
Obama says fine is 0 with small businesses and will give tax credits but doesn’t talk about big businesses.
McCain hammers Obama’s plan. Talks about how he wants the people to have the power and choice in picking their health care plan, not the govn’t.

Obama thinks our education system is behind all other coutries because of economy. Says we should spend more on education. (But we spend more than any other country already!) Give students a tuition credit, if you volunteer for peace corps, etc.
McCain says that throwing money at eduacation isn’t working, but there must be improvements.
Obama thinks the govn’t should step in and help. Then says that he agrees with McCain on some points.
McCain talks about voucher program and how it puts control in the hand of the parents.